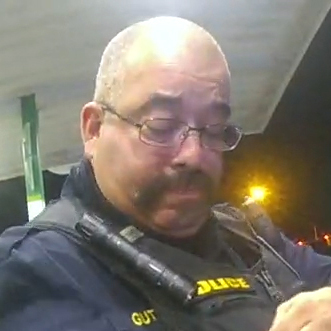 Ex-Windsor Police Officer Joe Gutierrez is no stranger to excessive-force complaints, according to the latest court documents filed in Army 2nd Lt. Caron Nazario’s pending lawsuit against him.

Gutierrez was fired in April after video footage showing him holding Nazario — who is described in the suit as of Black and Latinx descent — at gunpoint and pepper-spraying him during a traffic stop last December went viral online. Nazario has filed a $1 million lawsuit against the former lawman and Officer Daniel Crocker, who was also involved in the incident but remains on the force. The suit accuses both officers of racially motivated police brutality.

The two had pulled Nazario over for allegedly not having a rear license plate. Nazario had a temporary New York license plate displayed in his vehicle’s rear window, but the officers said they didn’t see it and accused the lieutenant of eluding police when he drove roughly a mile down Route 460 to a BP gas station before stopping.

According to an Oct. 27 court filing by Nazario’s attorney, Jonathan Arthur, Gutierrez — when asked under oath to identify by date and law enforcement agency any and all internal affairs investigations to which he had been subjected — disclosed an incident from his previous employment as an Isle of Wight County Sheriff’s Office deputy in which he’d used force on an elderly African American man during another traffic stop.

The subsequent internal affairs investigation allegedly concluded Gutierrez had committed a Level III violation of the Sheriff’s Office’s use-of-force policy and resulted in his being suspended for 10 days without pay in lieu of outright termination.

According to Sheriff’s Office spokesman Capt. Tommy Potter, Gutierrez was employed as a deputy with the agency from August 2017 through July 2020, at which point he left to pursue employment with the Windsor Police Department.

“At this time we are not releasing any personnel documents or additional videos due to the ongoing multiple investigations,” Potter replied to the Times that same day.

The viral body camera footage from the Dec. 5, 2020 incident sparked state and federal probes into the Windsor Police Department’s conduct. The Virginia State Police completed its investigation of the incident earlier this year and turned its findings over to Hampton Commonwealth’s Attorney Anton Bell, who was named a special prosecutor after Isle of Wight County Commonwealth’s Attorney Georgette Phillips recused herself. Bell’s office has yet to announce any prosecutorial decision. Concurrent investigations by Virginia Attorney General Mark Herring’s Office for Civil Rights and the FBI are still pending.

Herring’s office has been conducting a “pattern and practice” investigation that involves looking for evidence of discriminatory or abusive policing over the past 10 years.

​​”​​We are close to proposing an agreement with the Windsor Police Department that will outline internal changes and policies that need to be implemented in the department,” said Herring spokeswoman Charlotte Gomer. “Attorney General Herring is incredibly proud of the work that his Office of Civil Rights has done on this case.”

Arthur declined to provide the Times with documentation substantiating the alleged third incident, nor would he specify whether said employment applications occurred before or after Gutierrez’s time with the Windsor Police Department.

Arthur withdrew his motion the next day, Oct. 28. According to Arthur, “Gutierrez complied” with providing additional details, thereby negating the need for a hearing on the matter.

Gutierrez had previously used force against another Black man — Mark A. Hines Jr. — while in the employ of the Smithfield Police Department on Dec. 19, 2016. In body camera footage of that incident, which occurred near Church Manor Apartments, the use of force begins roughly 2 minutes and 40 seconds into the video as SPD Officer Will Wooley is asking Hines to exit his car.

Wooley then orders Hines to put his hands behind his back.

“Give me your other hand … you’re gonna get tased,” Wooley warns Hines.

Wooley then demands Hines roll over.

“Roll over or you’re going to get it again!” Gutierrez shouts.

Hines later attempts to flee the scene while handcuffed and Gutierrez wrestles him to the ground.

According to Gutierrez’s use-of-force report, Hines was charged with driving under the influence, obstructing justice and providing false information to police. According to Smithfield Town Manager Michael Stallings, “no complaints were received” regarding the Dec. 19, 2016 incident alleging Gutierrez had used excessive force.

In another court filing, also on Oct. 27, Arthur asked that Nazario be granted a protective order from Gutierrez and Crocker’s attempts to gain access to “highly sensitive information” from Nazario, including his military service record, medical records, home address, names of cohabitants, vehicle identification and military deployment orders.

“Given the media attention and high-profile nature of this case, the Plaintiff has considerable concern that if this information is leaked to outside sources, or retained by the Defendants, it can be used by nefarious parties to locate and harm the Plaintiff or his family members as indeed the Plaintiff believes that he has already suffered retaliation in the form of vandalism of his vehicle,” Arthur writes. “Plaintiff is also concerned that such information as contained in his military records and deployment orders implicate national security concerns to the extent that they reveal what Army units are deploying where and when.”

According to Arthur, the parties have since reached a “consent protective order” in this matter. A Nov. 11 court filing states the attorneys for Crocker, Gutierrez and Nazario have agreed to “permit discovery and trial preparation to proceed with a minimum of discovery motions over matters of confidentiality.” According to the accompanying court order, any document production or deposition testimony that contains financial information or employment personnel files may be designated as “confidential” and may be disseminated only to the parties, their respective attorneys and their staff, expert witnesses, insurers providing a defense in the case and others to whom the parties provide prior written consent. Personally identifying information, military records and medical information is to be designated as “confidential — attorney’s eyes only.”

A virtual settlement conference is scheduled for Nov. 23, but Arthur declined to comment on whether he expects to reach an agreement with Crocker and Gutierrez or proceed to trial. If a settlement isn’t reached, a trial date of March 28 has been set.

Editor’s note: This story has been updated to include comments from Charlotte Gomer, a spokeswoman for Attorney General Mark Herring, on the status of his investigation of the Windsor Police Department.