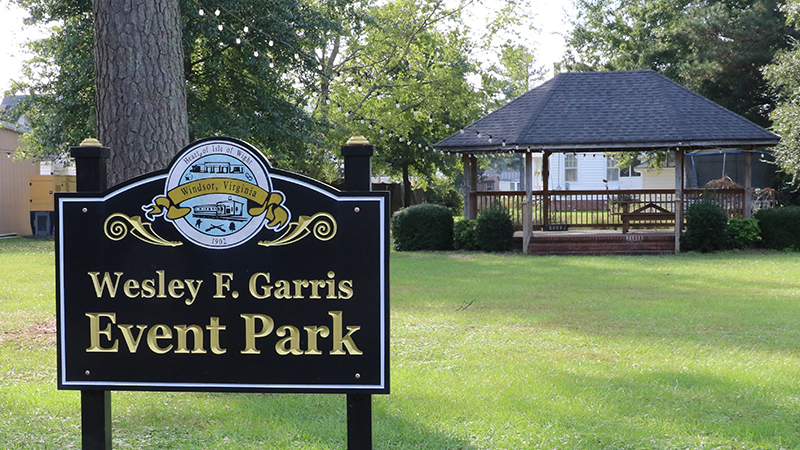 A member of the public stated at the Oct. 12 Windsor Town Council meeting that the gazebo on Duke Street was becoming associated with drug activity and vandalism due to young people who regularly loiter there. The town followed up on the issue during the council’s Nov. 9 meeting, and the member of the public later expressed his disappointment with the town’s response.

Windsor Town Manager William Saunders shared at the Town Council’s Nov. 9 meeting what the town has been doing to address concerns brought forward by a member of the public in October with regard to kids gathering and allegedly participating in drug activity and vandalism at the town gazebo and park pavilion on either side of the library on Duke Street.

The member of the public, Phillip Barnes, was also present at the Nov. 9 meeting, and in a Nov. 10 email to the mayor, he took issue with the quality of the town’s follow-through on the matter.

In his report during the Nov. 9 meeting, Saunders said, “One of the things that (Barnes) requested was that there be a sign that discusses the hours of the park from either dawn to dusk or sunrise to sunset.”

The town manager added that there are actually two parks around the library — the Robinson Park, where the playground is that the county maintains, and Wesley F. Garris Event Park, where the gazebo is.

“There is already on Isle of Wight County’s signage at Robinson Park language about it being sunrise to sunset,” Saunders said. “So we’re looking into adding a sign to the Wesley Garris Event Park sign on the gazebo side that also either says dawn to dusk or sunrise to sunset is the hours.”

He noted that Barnes’ information has also initiated a lot of conversations among staff in Town Hall and the police department about concerns regarding that area of Duke Street.

“But because of potential tactics and strategy and whatnot of ongoing investigation, we can’t really divulge in a public meeting what the police department and their allies are working on over there,” Saunders said. “But just know that it’s being discussed, we’re aware, and we are going to work on getting this dawn-to-dusk sign on the gazebo side.”

On Nov. 10, Barnes sent an email to Mayor Glyn T. Willis, copying the Windsor Weekly. In the email, he expressed his disappointment with the town’s response to his concerns.

“I attended the meeting last night in hopes of hearing more discussion concerning how Windsor can best address the gazebo issues,” he said. “Unfortunately, I sat there for almost two hours only to hear that signs for the gazebo are being looked into. There were several other options discussed last month, and these were not brought up last night. What is the plan with modifying the town bylaws so the police can do more? Were cameras looked into? These can be placed on top of the library to keep the kids from messing with them.”

During the Oct. 12 Town Council meeting, Windsor Police Chief Rodney “Dan” Riddle said, “You can put signage up. Whether or not it’s enforceable, I think the town would have to adopt a municipal code for loitering. (Town Attorney) Fred (Taylor) may be able to chime in a little more on that.”

Riddle also noted that because the offenses involved around the library are committed by juvenile offenders, it is ultimately and unfortunately a situation where there are basically no consequences for the actions.

Riddle said he has asked for cameras to go up in the area around the library.

“I’ve had a discussion with the (town) manager about that or even putting up some fake cameras over there to try to dissuade some of the behavior,” he said.

The mayor concluded the discussion Oct. 12 by asking Saunders, Riddle and Taylor to determine what the town’s options are — including if cameras could make a difference — for reasonable deterrence.

In his Nov. 10 email, Barnes said Riddle was asked in October to give a report to update the Town Council.

“There was nothing from the chief last night,” he said. “Needless to say I was disappointed in the follow through with the council.”

Barnes did note that he spoke with Riddle after the meeting.

“He filled me (in),” Barnes wrote. “The town has increased patrols of the gazebo, and the kids no longer hang out there, for now. They have moved on to a house on Court Street. Congrats on getting them to move, but that does not do away with the problem.

“I am, first and foremost, a father trying to raise his kids in the best possible way in an ever-changing environment,” Barnes wrote in conclusion. “I am also a citizen in Windsor and voiced my concerns to the town. It feels like these concerns are falling on deaf ears.”