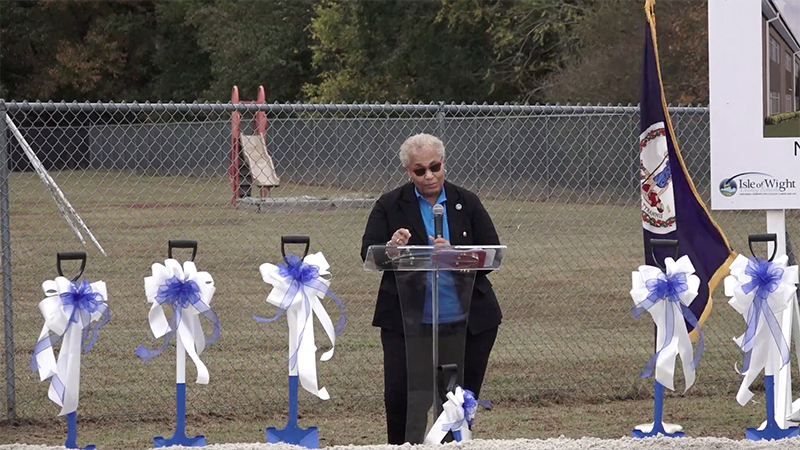 School Board Vice Chairwoman Denise Tynes, who attended Hardy Elementary herself as a child, speaks at the groundbreaking for the replacement school. Courtesy | Isle of Wight County Schools

The new school will be modeled after Florence Bowser Elementary in Suffolk and house nearly 900 students in preschool through fourth grade. Isle of Wight’s Board of Supervisors approved a guaranteed maximum price of $36.8 million for the project in September, giving the project its final go-ahead.

The new Hardy is slated to be finished by mid-2023, at which point the adjacent 1960s-era elementary school will be demolished.

The ceremony, which was streamed live to the school system’s Facebook page, began with a group of Hardy students performing the national anthem, followed by remarks by Superintendent Dr. Jim Thornton.

“Those with us today, who are watching online, thank you for joining us and being part of this historic moment,” Thornton said.

“It gives me enormous pleasure to be here today for the groundbreaking ceremony,” said School Board Vice Chairwoman Denise Tynes, who entered first grade at the existing Hardy in 1964. “It is an honor for me personally as a School Board member, as a former Hardy Elementary School student and as a child who grew up in the Archer Gardens neighborhood just across the street. … What an exciting time this will be for our students, staff, district and county.”

Rudolph Jefferson, who represents the Hardy District on Isle of Wight’s Board of Supervisors, is also a Hardy alumnus.

“I attended this school back in the early ’60s,” Jefferson said, calling the groundbreaking a “milestone” and a “dream come true.”

“Constructing a new Hardy school is not a want, but a necessity for the public education in Isle of Wight County,” Jefferson said. “This school will show that equity and inclusion is vital for the growth and development of our students. It allows our staff and students the opportunity to achieve at the highest level possible. … This celebration signifies that the School Board and the Board of Supervisors can accomplish any goal when everyone works as a team for the same mission.”

“This is a fabulous day,” added Bill Cram, executive vice president of the project’s construction management firm, M.B. Kahn Construction. “This is going to be a fabulous facility. On behalf of M.B. Kahn and our partner, Heartland Construction, as well as RRMM Architects, I want to thank the Board of Supervisors, the School Board, the administration for allowing us the honor of constructing this facility.”

Officials involved with the project, each accompanied by a current Hardy student, then donned hard hats, forming a semicircle as they ceremonially turned over shovels full of sand. Each shovel was painted blue and white — Hardy’s school colors — and decorated with a matching bow.

“We hope to see everybody back here in 2023 for the grand opening ceremony,” said Lynn Briggs, IWCS spokeswoman and master of ceremonies.