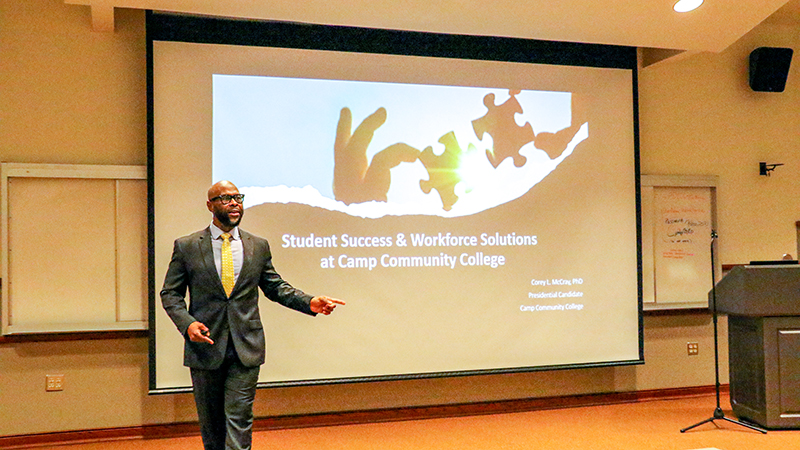 Camp Community College Interim President Dr. Corey McCray spoke to community members during an Oct. 6 public town hall meeting held at the college’s Regional Workforce Development Center, sharing his vision for the college’s future and answering some pointed questions as part of his bid to become the ninth permanent president of the school.

As a previous college press release noted, McCray has been certified the finalist by the State Board for Community Colleges to be Camp’s new permanent president. He was set to meet with the college’s local board and then conduct the Oct. 6 public town hall meeting, which was also streamed live and can be found on the YouTube channel named PDC EDU.

The release stated that the chancellor will decide following those meetings, and the feedback they produce, whether to hire McCray or to begin a new, national search.

The town hall began with an introduction of McCray, highlighting how he has lived and worked in education in the Tidewater area for more than 25 years.

He has a bachelor’s degree in workforce and curriculum development from Southern Illinois University at Carbondale, a master’s degree in education from Cambridge College and a doctorate in school leadership from Old Dominion University.

McCray, who served seven years in the U.S. Navy, has gained experience in the wide range of responsibilities that come with running educational institutions after serving in key leadership roles at Tidewater Community College and the Pruden Center for Industry and Technology, which is now known as the College and Career Academy at Pruden.

McCray is also a former teacher, coach, principal and community college adjunct professor, the latter position being one he held at both TCC and Paul D. Camp Community College.

Before he started his presentation, McCray expanded on the introduction to give people a better idea of who he was.

“I realize that when economic development happens, businesses come to look at communities, and they want to know, ‘Is there an avenue for a workforce?’ And the first place they look is to the community college,” he said. “That’s why I think it’s important that I share with you who I am and my background and my experience and how I’ve gotten here.”

He noted that he has a passion for helping people develop to go on to the next level of their careers, because he himself was in such a situation where he required that development.

“I was that person who was transitioning out of the military,” he said, noting he wanted to become a teacher. “I didn’t know how I was going to become a teacher. So, thankfully, there was the Military Career Transition Program. In knowing that I needed to take additional courses and be prepared for that, I found myself, in 1993, walking the campus of Tidewater Community College as a student in preparation for transitioning out of the military.”

He walked those attending the town hall through his employment history, sharing details of how each position helped him develop as an educator and, ultimately, as an executive in education.

Toward the end of this expanded introduction, he highlighted the time when he was asked to step in as TCC executive vice president, a role he accepted and served in for two years.

“That time was really pivotal for me because it gave me the opportunity to have an understanding of the overall college function — every aspect of it, not just workforce, not just academics and not just student services but how it all works, because it was all my responsibility,” he said.

Most recently, he had been working as the associate vice chancellor for programs at the Virginia Community College System office when, in March, he was provided the opportunity to come to Camp as the interim president.

“I wasted no time saying ‘yes’ to that, not because any college would do, but I just shared my history with you all about me and this community,” he said. “So I thought it was an opportunity for me to come back home, and so I stand before you today with the interest of staying home.”

“Those are the two things that I think encompasses everything that a community college does,” he said.

He emphasized that those involved in education show up because of their students.
“We show up to do the work and make sure that our students are successful,” he said, adding that there are a couple of ways students’ success is measured — are they in the workforce, or are they transitioning to universities, and when they get there, are they having to start over?

“These become the priorities, the three things that I think if we focus on here at this college, it changes the trajectory of the impact that Camp has on the lives of our students in our communities,” he said.

With regard to college enrollment, which he said needs to be improved at Camp, he spoke on improving conversion rates of dual enrollment students and engaging special populations.

Also in reference to student success, he highlighted workforce connections and transferability, speaking briefly about experiential learning and guaranteed transfer.

Lastly, while expanding on the priority of business needs, McCray emphasized the importance of the college being agile and responsive to those needs. He talked about community partnerships, and not just the business community; he spoke on strategic workforce preparation; and he also championed leveraging opportunities with shared resources.

During the question-and-answer portion of the town hall, which featured 10-plus questions McCray had not seen in advance, he was first asked what attracted him to apply for the position at Camp, since there were several colleges and universities he could have applied to.

When asked to describe his philosophy of leadership, McCray mentioned the popular term “servant-leadership,” but then he explained what that means for him.

“A servant-leader is someone who understands that it’s not about them,” he said. “It’s not about Corey McCray. It’s about Camp Community College and this community. And that means that as a servant-leader, you engage with partners, internal and external, leveraging the knowledge of faculty and staff, leveraging the knowledge of the business community and other entities to help guide the direction and the demand of this college.

The next question was prefaced with the statement that McCray is the fourth individual in the last 10 years to fill the presidential leadership position at Camp. The question then asked how, if at all, this history will influence the way McCray leads.

McCray began his response by stating that this opportunity, for him, is not a stepping stone.

“I also don’t think this is my last college,” he said. “However, I do believe that I will be here, if you support this, for as long as Camp and my strategies and goals are aligned. And so I’m not looking for the next big college or the next career move that is advantageous for me in that. I shared with you the last 26 years of my career have been here in this community or close thereby. My family’s here, I’ve raised my family here, and I plan to stay here.”