Lawyer shares journey from Camptown to the NSA 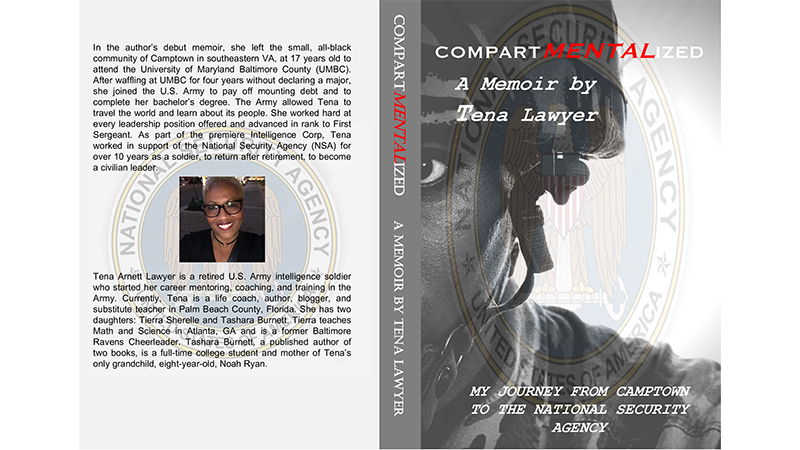 Tena Lawyer, who was born in Franklin and grew up in Camptown, shares in her debut memoir details of an epic life that has included military service, taking her all over the world, and military and civilian roles with the highly secretive National Security Agency. Her book, the cover of which is pictured above, will be released Oct. 1 via Amazon, Barnes & Noble and Target.

Tena Lawyer is a retired teacher from the U.S. intelligence community who is used to being busy, but she found herself with a lot of time on her hands in 2020 after the COVID-19 pandemic arrived in the United States.

With that extra time, the Franklin native reflected on her mortality and legacy and realized there were stories she wanted to tell about her life.

From that desire was born her debut memoir, a 365-page book that will be released Oct. 1 titled, “CompartMENTALized: My Journey from Camptown to the NSA.”

Lawyer, now 59 years old, was born in Franklin and grew up in Camptown in Isle of Wight County. She left the area at the age of 17 to go to college at the University of Maryland, Baltimore County.

As noted in the summary of her book, she lacked clear direction while at UMBC, going four years without declaring a major.

But then she joined the U.S. Army to pay off mounting debt and to complete her bachelor’s degree. The Army allowed Lawyer to travel the world and learn about its people, and the military experience proved to be an effective teacher for her, helping her to become a key teacher to many.

“I think the military instilled discipline in my work habits, if you will,” she said. “That really honed them for me. I do believe, as an educator, personality has a little to do with that as well, but I think that I needed that discipline that the military provided, so I think that was really a catalyst for me to do well in the future.”

Her book summary noted that she worked hard at every leadership position offered in the military and advanced in rank to first sergeant during her 20-year military career.

Lawyer chose the intelligence track based on her initial scores to enter the military.

“So I was in the intel community the entire 20 years,” she said.

As part of the premier Intelligence Corps, she worked in support of the National Security Agency for more than 10 years as a soldier, on and off based on assignments.

But her work in the intelligence community did not end with her military career. She returned to the NSA as a civilian leader.

Her book summary stated that for many years, the NSA was identified — together with its iconic dark-glass, cube-shaped headquarters building in Fort Meade, Maryland — as No Such Agency. It took on a mysterious persona, and so did its workforce.

The intelligence agency has four replicated regional centers spread across the U.S., the book summary continued, and Lawyer worked at three such centers, including the headquarters building at Fort Meade and the agency’s school, the National Cryptologic School.

“Of course, your job is secretive,” Lawyer said. “It’s not like you can talk about it with the family or with the neighbor. It’s something you do for eight hours a day, and you hope you can go home and turn it off. So it’s not like you can share your day other than ‘It was good,’ or ‘It was really rough.’

“I think being coined the most secretive agency in the intelligence community creates that mystique, but you get out of your car and you walk through the doors, you’re still a human being interacting with other human beings,” she added.

She retired from the intelligence community in 2017, but the nature of her work still carries with it certain responsibilities and impacts on her retired life.

“Because I had a top-secret clearance with access to sensitive, compartmentalized information, which is where I draw the (book) title from — that ‘CompartMENTALized’ — I have a lifetime obligation to have NSA review anything I write toward my Ph.D. degree, any books, pamphlets, conference attendance, anything that I publicate needs to go through a review process. You have to send it to them for them to read it and say, ‘OK, it does not contain classified or sensitive information. You may talk about it. You may release it.’”

It was less than a year ago that Lawyer began working on her book.

“I had a lot of time on my hands,” she said. “As an educator, I don’t like having a lot of time — I want to be learning, producing or doing something. I was also thinking about my mortality and my legacy, like most of us were.

“I’m not a young person; I’m 60 years old in a few weeks, so with that in mind, there were stories that I wanted to tell and stories I had never told, and the time was perfect,” she continued. “And I wrote and I wrote, and it was so freeing to really write my life story from my vantage point.”

She noted the book is subdivided into three parts.

“The first part is the early years, then I talk about my Army career, and finally, part three is about ‘The Agency,’” she said.

The book addresses not just some of the work she did for the NSA but also, importantly, the culture and the environment of the workplace.

Contrasting what working at the NSA was like as a civilian after working there as a soldier, Lawyer said, “I think as far as tradecraft, it was similar to what I was doing in education, in training, in teaching, mentoring, coaching soldiers. The difference is, of course, the environment or the climate, and as a military person, I never gave it too much thought, working at NSA, how civilians interacted with other civilians, because my time was temporary.

“So once I returned as a civilian, then I started noticing the culture, the climate, how I fit into that particular climate.”

Lawyer was ultimately promoted to GG-15, which she said is the highest GG or General Schedule grade in the federal government.

“After that is the senior executive level, so I was a GG-15, so I was successful, but inside I was dying,” she said. “I had a successful career, but I am an observer, I’m clearly now an author. It was successful yet I had to compartmentalize, and if you know anything about compartmentalizing, that’s a psychological thing to protect you from your incongruency with values and environment.”

She affirmed that what led to that dying feeling inside was not the job itself but the culture, environment and leadership.

After retiring from that environment, she moved to West Palm Beach, Florida.

Over the years, Lawyer has also maintained her ties to the community where she grew up, serving as a member of the Camptown Reunion Committee.

As for what she hopes readers of her book will take away from it, Lawyer said, “I hope they get a good glimpse into a Black woman’s life from the ’60s until now.”

She said she hopes readers can take away courage and perseverance and accept the gifts, the imperfections and all the things she has experienced in her life.

“I pray that they will feel stronger about their own path and journey and maybe encouraged that they, too, can set goals and achieve them and have an epic life,” she said.

The book will be released via Amazon, Barnes & Noble and Target on Oct. 1 in paperback, hardcover and e-books.