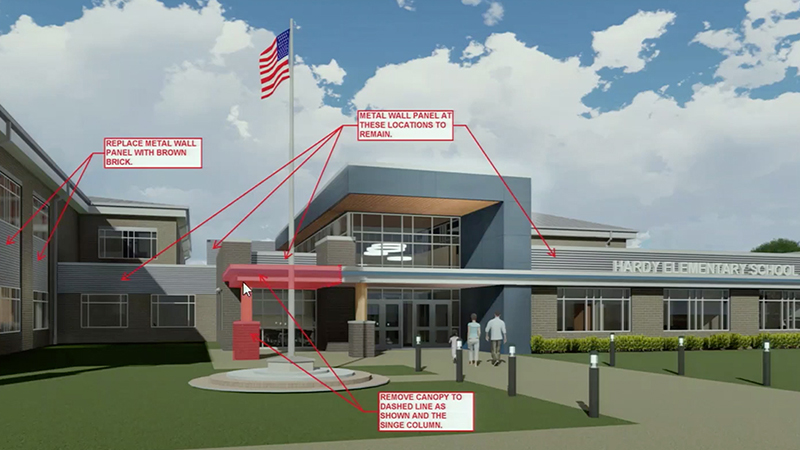 An updated rendering of the new Hardy Elementary presented at the School Board’s Sept. 9 meeting shows which architectural features will be eliminated or changed to save on cost.

That’s the guaranteed maximum price the project’s general contractor, M.B. Kahn Construction, quoted Isle of Wight County’s School Board at its Sept. 9 meeting now that the design documents for the proposed school are 100% complete.

The figure includes just under $32.7 million in actual costs and a 2.5% contingency budget. Should construction end up costing more than the quoted $33.7 million, Kahn will be responsible for paying the overage, but any cost savings will be returned to the county.

The School Board voted unanimously to approve the maximum price and send it to Isle of Wight’s Board of Supervisors next week for final approval.

When the county borrowed $34 million for the project in 2020, the Board of Supervisors had intended to put roughly $27 million of that money toward Hardy and use the rest for other capital needs. But by April, Kahn warned the price tag could go as high as the full $34 million amount due to a nationwide rise in the cost of building materials.

“I’ve been doing this a long time; I’ve never seen a construction inflation market like we’re seeing now,” said Bill Cram, Kahn’s executive vice president. “The closest I saw to it was in the late 1970s.”

As of April, softwood lumber was up 73% year-to-date.

“The good news is that’s fallen back to pre-COVID levels; the bad news is there’s very little wood in the school,” Cram said. “But scrap steel was up 26% the last two months of last year, another 21% January/February. Scrap steel is the foundation of all steel products: reinforcing steel, steel beams, metal panels on the building, you name it.”

As of Sept. 1, Cram said, the cost of aluminum, which impacts all the building’s doors and windows, had risen another 8%.

Following Kahn’s $34 million estimate in April, the contractor worked with the county’s New Hardy Elementary Construction Committee to reduce costs by “focusing on needs, not wants.” According to Cram, the changes were aesthetic in nature and included no reduction in the building’s proposed square footage or functionality.

Among the more noticeable changes is the elimination of the metal exterior accent panels above and below the school’s windows. These will now be made from a slightly darker brick than the rest of the building.

“At this point, brick is cheaper than metal; it didn’t used to be that way,” said Jeff Harrison, assistant K-12 director for the new Hardy’s architectural firm, RRMM.

The new 107,945-square-foot school will be modeled after Florence Bowser Elementary in Suffolk and be built on land adjacent to the existing 1960s-era Hardy. As of June, tentative plans called for saving a 17,251-square-foot wing of the existing school and the creation of a 25-space parking lot for the detached building, which the plans stated would be repurposed into a school administration building. But that “probably won’t” happen at this point, Harrison said.

When schools and businesses shuttered last year to slow the spread of COVID-19, he said, the construction industry continued to operate as a designated essential service. But a number of businesses on the supply-chain side weren’t designated as essential and ended up shutting down, thinking the construction industry would too. This, he said, resulting in a backlog of supply orders that persists to this day.

“And the last part is labor shortages; we are seeing that in the construction industry and we think it’s going to continue,” Cram said. “The reason I’m bringing this up is to emphasize that the time to buy is now. I’m having this conversation with many clients. I do not foresee prices dropping in 60 days, 90 days, 120 days, probably not at best for a year.”

With the School Board’s approval on record, the matter will head to Isle of Wight’s Board of Supervisors next week, since the county is funding the project. Provided the supervisors approve the guaranteed maximum price proposal and execute a construction-phase contract, the project will be able to proceed as soon as the permitting process is completed.