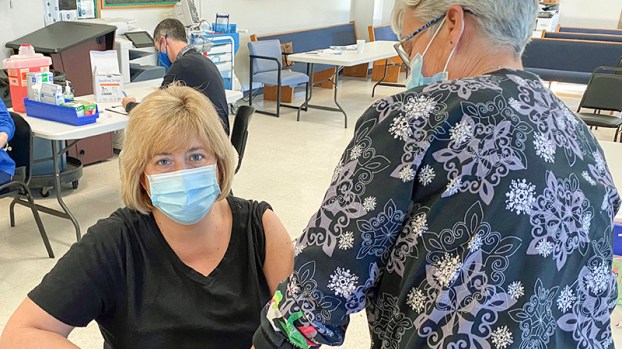 Bon Secours Southampton Medical Center began distributing the COVID-19 Moderna vaccine to frontline health care workers on Dec. 29. Kim Marks, president of Southampton Medical Center, receives the first dose of her vaccine administered by Laurie Ross, vice president of nursing. “I am proud to be part of the Bon Secours ministry and that Southampton Medical Center is able to provide vaccinations for all staff,” said Marks. Jenna Green, a spokeswoman for Bon Secours said, “We are following the CDC's recommendations and will begin by vaccinating associates with the greatest likelihood of delivering care to COVID-19 patients. These associates work in high-risk areas such as the ICU, ED and COVID-19 cohort units. However, we are working quickly to vaccinate all of our associates as soon as possible.”

Vaccine distribution behind schedule in state

A Virginia Department of Health official on Wednesday acknowledged a slower-than-expected COVID-19 vaccine rollout, but in part cited delays in data collection leading to an undercount in the number of vaccination doses received and given.

Two weeks after the first vaccines were shipped and given to frontline healthcare workers in the state, just 19% of those distributed to the state have been administered — 54,295 vaccine doses given from the 285,725 received as of Dec. 30. The total doses administered represent just over half a percent of the state’s 8.5 million people. Across the country, 12.4 million doses have been distributed, with just under 2.6 million receiving a first dose of a COVID-19 vaccine as of Dec. 30.

The doses the state has received, according to Christy Gray, director of the division of immunization with the state health department, include those shipped to CVS and Walgreens waiting to be administered to long-term care workers and patients.

Both the Pfizer-BioNTech and Moderna vaccines that have been distributed require two doses, and no one has yet to get both, as it has not yet been the appropriate time frame.

“We just didn’t have enough doses that we could allocate to the different facilities,” Gray said. “It was just that we had to scale down, so we have less doses to give to healthcare personnel, and we have to calculate and balance the amount of doses we are giving to long-term care facilities and healthcare personnel that are both recommended to be receiving this vaccine during 1A.

It just overall reduced the total amount of doses that we could allocate to our partners and get our vaccine out to the field.”

The state health department notes on its website that the new vaccines distributed are the number of vaccine doses sent to healthcare providers the previous day.

“We’re working with our providers if they have any issues in entering this information into our registry and troubleshooting those issues as they come up,” Gray said. “Dealing with new systems and operations at this scale is expected to be slower at the beginning, but we are expecting to increase our efficiency over time.

“I would like to think that 47,000 doses in two weeks is not a small number, and we are proud of Virginia providers for accomplishing that.”

In the Western Tidewater Health District, 560 people have received the vaccine, including 318 in Suffolk and 190 in Isle of Wight County, but just 36 in Franklin and 16 in Southampton County. The first dose at Sentara Obici Hospital in Suffolk was administered Dec. 17 using a Pfiizer vaccine, with the first doses staggered over days and weeks, which means that the second doses cannot be administered until at least Jan. 7.

The state has not mapped 8,870 of the vaccine doses given as of Dec. 30, but the data disparities do not stop there. In demographic data VDH provides, it is lacking race and ethnicity data on more than 40,000 people who have received vaccines. The data it does provide notes that 9,503 vaccine recipients are White, 1,570 Latino and 1,104 Black. It also does not have data on the gender of 4,603 vaccine recipients.

It also is not collecting information on people who are declining to get the vaccine.

The state expected to receive 480,000 vaccine doses from Pfizer and Moderna before the end of the year, but instead was told it would receive 370,650. It placed an order for 146,400 doses of the Moderna vaccine, and it received 72,125 doses of the Pfizer vaccine.

Gray said the state expected to get the 480,000 vaccine doses by the end of the year. That means it would have to receive 194,275 vaccine doses Dec. 31 to reach that total.

She also said that based on estimates from the federal Operation Warp Speed, the state is planning to receive 100,000 vaccine doses weekly — about 50,000 each of the Pfiizer and Moderna vaccines.

“The actual amount of vaccine received in Virginia is a moving target and is dependent on when and how quickly vaccinations go through our manufacturers,” Gray said.

Despite the delays, she praised the rollout of the vaccines and noted that no one cut corners in their development. She said she is in daily contact with Operation Warp Speed and described the vaccine rollout as “an unprecedented public health effort all around the world trying to work together to make happen.”
Healthcare workers and those at long-term care facilities will continue to get vaccinated in the coming weeks.

In Phase 1A, health care workers and residents of long-term care facilities are first in line for the vaccine, according to the Centers for Disease Control and Prevention’s Advisory Committee on Immunization. Gray said she was not able to provide timeline as to when Phase 1A would be complete.

The CDC has said Phase 1B is reserved for frontline essential workers and those who are at least 75. People in Phase 1C include people age 16 to 74 with high-risk medical conditions, people aged 65 to 74 and other essential workers.

The state health department is currently reviewing CDC recommendations for Phases 1B and 1C.

“I always like to remind people that it’s been two weeks, then we had Christmas in there, you’ve got weekends in there,” Gray said.  “And the amount of vaccine that is getting distributed out, it’s happening on a weekly basis and mass release. … Vaccinations are increasing.”

GOTR program empowers 22 runners With COVID-19 precautions in place, the nine girls on the Franklin team and 13 members... read more