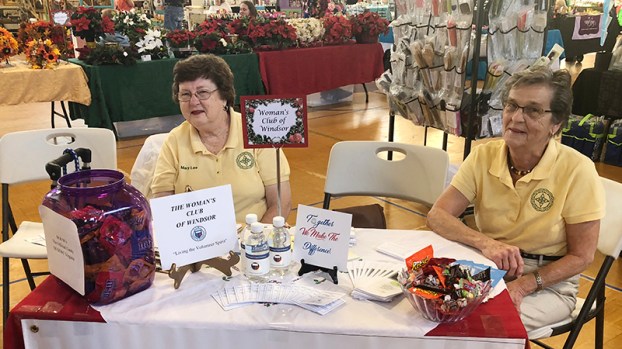 Dorothy Gwaltney, right, with Mary Lee Willis at the table for the Woman's Club of Windsor during a past craft show in the Windsor Town Center. The club has named a scholarship in memory of Gwaltney, who died earlier in 2020.

Dorothy G. Gwaltney, a lifelong resident of Isle of Wight county and 50-plus-year member of the Woman’s Club of Windsor who died this past January, has been chosen as the namesake of the club’s annual scholarship.

Two Dorothy G. Gwaltney scholarships, each in the amount of $1,000, are offered to one male and one female senior at Windsor High School each year based on financial need, academic excellence, extracurricular activities and community service. This year’s winners were Alexya G. Massey and Stephen W. Branch.

“It did not matter what project the club was involved in, Dot could be counted on to work,” said Women’s History co-Chairwoman Helen Hill. “Whether it was the fashion show-card party, raising money for the ambulance for Virginia Tech’s Rescue Squad, serving dinners for the Hunt Club and Ruritans or being in parades with other club members, Dot was there.”

“She served at the local election polls, was a member of the Friends of the Library and served on the Walter C. Rawls Library board, and was president of the Woman’s Fellowship at the Windsor Christian Church, to name a few,” Hill added. “She entered needlework projects in the County Fair to support that project. The Woman’s Club of Windsor is honored to name a scholarship in her name for all her dedication to the club and the community.”