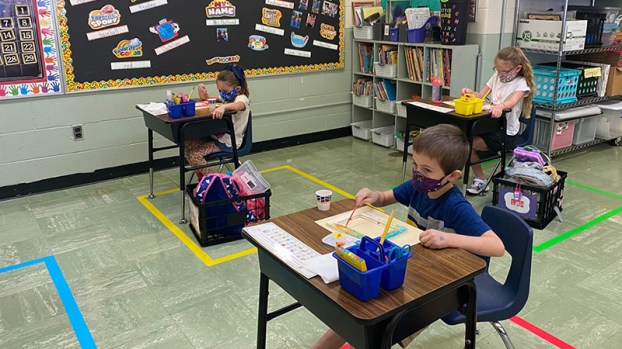 Emma Lee Edwards’ return to Isle of Wight Academy on Aug. 31 began with the 17-year-old high school senior waking up early, picking a first-day outfit and eating breakfast, just as she had at the start of previous school years.

Except this year, her morning routine — and that of her 15-year-old sister, Clara Mae, and 12-year-old brother, Ross — includes one more step: a temperature check. According to their mother, Wendy, the school is requiring all parents to screen their children using a smartphone app by 8 a.m. each day before they are allowed to set foot on campus.

The three siblings then head out for the day, Emma Lee in her own car and the other two in Wendy’s. While Wendy expressed confidence in the precautions the school has taken to avoid a COVID-19 outbreak on campus, she’s opted to drive the younger two herself as an added measure of safety rather than have them board a school bus as they’ve done in previous years. Those who ride buses, which have been capped at one-third capacity, are given a second temperature check prior to boarding.

“We had to sign a variety of contracts … to agree to the multiple temperature checks per day,” Wendy said.

Upon arrival, the students are directed to report to one of two gymnasiums on campus based on their grade levels, where they are to stand six feet apart from anyone outside their immediate family while awaiting another temperature screening. They’re also required to wear face masks at all times. From there, each student is issued a Chromebook, which they must return at the end of the school day for sanitizing, and are directed to proceed along a designated foot traffic pattern to their first class.

“They’re not allowed to walk together or next to anyone else,” Wendy said. “Teachers are standing in doorways. They’re watching them like a hawk.”

This year, the school has 637 students enrolled in preschool through 12th grade. To minimize the number of secondary school students changing classes at a time, Headmaster Mark Munford said the school has implemented a two-bell system, where half the students in grades 6-12 move at the first bell and the other half at the second.

For lunch, students have two options: bring their own or order a meal ahead of time. For grades K-7, meals are delivered to students at their desks, which are spaced six feet apart. Grades 8-12 walk through the cafeteria to pick up their meals and then return to their desks.

All K-7 classes are capped at 18 students, but some for grades 8-12, such as Emma Lee’s dual-credit statistics course and Clara Mae’s driver’s education course, are held in the school’s cafeteria to accommodate a larger group while maintaining social distancing. The school’s band room and library are also being used for this purpose.

When dismissal time comes, those who arrived by bus are given another temperature check before they are allowed to board for the return trip.

There’s also an isolation room on campus where students who exhibit symptoms of COVID-19 can wait for their parents to pick them up.

IWA isn’t offering parents the option of continuing with the virtual learning the school offered last spring, but even if it had, Wendy said she would have chosen in-person instruction anyway.

“I’m an educator myself,” said the history faculty chair at Paul D. Camp Community College. “It is very difficult not only to teach remotely in a virtual situation, but it’s very hard for students to learn that way. My children did fine in the spring … but I feel like it’s far better to have multiple learning experiences in person, as long as it’s safe.

“My children have been completely isolated for the past six months,” she added. “They haven’t had any  interaction with anyone besides myself and my husband.”

But the school isn’t offering any clubs or communal activities for students either at the moment. IWA’s football, volleyball and cross country teams are currently in pre-season practice, but only cross country has been approved by the Metropolitan Athletic Conference to begin competing on Sept. 28.

“Fall sports are currently on hold waiting on the Virginia Colonial Conference and the Metropolitan Athletic Conference to decide,” Munford said. “There are several options being discussed.”

By Stephen Faleski and Nate Delesline III Half of Virginia’s 132 school divisions have decided to offer some form of... read more