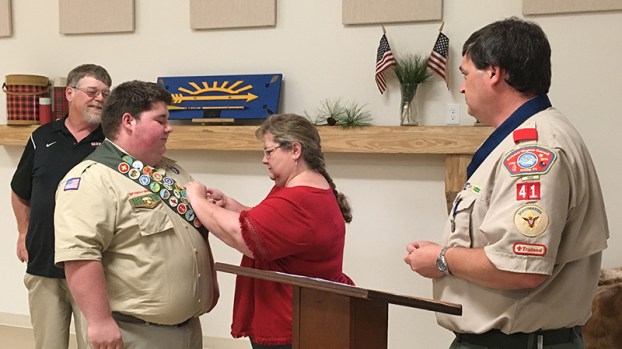 Phil Bowden looks on as his wife, Julie, pins the Eagle Award on the uniform of their their son Phillip. At right is Boy Scout Troopo 41 Scoutmaster Carter Goerger.

Phillip Lee Bowden’s dedication to Scouting and its principles for 10 years has put him in good company. On the evening of July 31, the 18-year-old was formally inducted as an Eagle Scout, the highest honor for any Boy Scout. The ceremony took place in the Isle of Wight Hunt Club and witnessed by fellow Scouts of Troop 41, family and friends.

Speaking right before the program, the recent Isle of Wight Academy graduate said he began as a Cub Scout in sixth grade.

“Scouting has taught me a foundation on which to build my character,” he said. “It’s given me experiences I would never have had outdoors.”

Speaking of the latter, the Scout chose for his required service project to fix up some parts of the campgrounds in Wakefield, where he and fellow Scouts have spent many years … well, camping.

The work featured making a new fence line and some landscaping, which included new beams and flowerbeds. Photos of the work he planned and directed were included in a display of his Scouting accomplishments over the years.

With the coveted Eagle feather in his cap, Bowden acknowledged there’s always a possibility he could later return to Scouting as a leader.

For now, a new adventure awaits. He’ll attend James Madison University this fall, and already has a strong goal of what he’ll do with the increase in his education.

Scoutmaster Carter Goerger said the start of the ceremony, “This is an occasion for pride and joy, and also a serious matter. You have distinguished yourself. You have earned the Eagle Award — wear it with humility.”

A fellow Scout lit candles to represent the Scout Law and Oath, which includes among its 12 attributes to be trustworthy loyal, kind and reverent.

Doug Rose, another troop leader, led the Eagle charge and asked Bowden to rededicate himself to Scouting’s principles.

Called to the front by Goerger were Lee’s parents, Phil and Julie Bowden. She pinned the award on her son’s already bedecked uniform, which already includes 25 merit badges sewn into the sash.

For his part, Lee thanked his family and everyone who “helped to make me the man I am today. Scouting has taught me leadership, independence and responsibility as a foundation, and a respect for the outdoors.”

He also singled out for special thanks Donald DeCoster, R.A. Howell and Mary Lee Willis on behalf of her late husband, Larry R. Willis, a former Scoutmaster.

With the award, Bowden becomes the 55th Scout in that troop to make Eagle.

Tropical Storm Isaias will bring wind, rain and some minor to moderate coastal flooding and river flooding to the area... read more