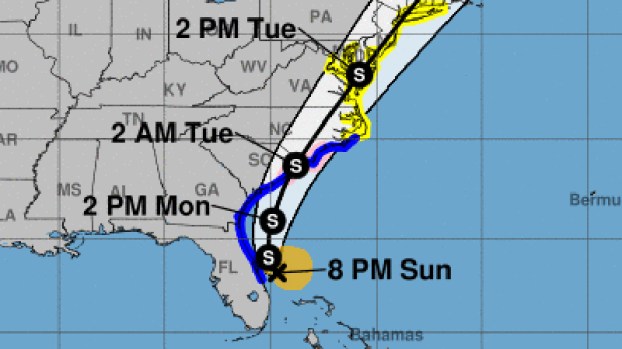 Tropical Storm Isaias will bring wind, rain and some minor to moderate coastal flooding and river flooding to the area late Monday and Tuesday morning, according to a National Weather Service Wakefield meteorologist.

A Tropical Storm Watch and Flash Flood Watch are in effect for the Hampton Roads area. Meteorologist Mike Rusnak said it will be a quick-moving storm.

“Late Monday night and Tuesday morning will be the peak time,” he said. “It’s going to be a quick-moving storm, so most of the areas will have a 6-8 hour period of (impacts).”

Rusnak said to expect heavy rain, gusty winds about 40 to 50 miles per hour, and one to two feet of minor to moderate coastal flooding. There will be some river flooding, likely for the rest of the week, he added.

“All the preparedness should be done prior to the end of Monday,” he said.

Isaias spent Sunday skirting the coast of Florida and was expected to move up the eastern seaboard on Monday, likely making landfall near the South Carolina/North Carolina border on Monday evening.

There is a marginal risk of tornadoes late Monday into Tuesday, according to warnings issued by the National Weather Service.

Now is the time to check your emergency plan and emergency supplies and take necessary actions to protect your family and secure your home or business, the National Weather Service said. Outside preparations should be concluded as soon as possible, before conditions deteriorate.

WINDSOR The town of Windsor hosted a groundbreaking ceremony on July 21 for its new Public Works building, which is... read more