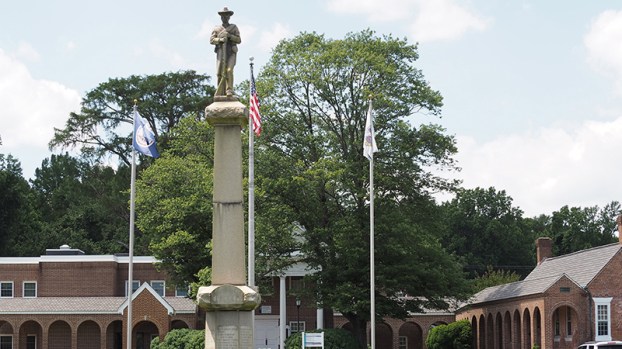 Isle of Wight County's Confederate monument won't be going anywhere until at least December, when a new task force presents its recommendations for alternate locations and signage contextualizing it should it stay at Monument Circle. File photo

Isle of Wight County has yet to schedule a public hearing on the fate of its Confederate monument, and at present, isn’t even planning to discuss the matter at its Board of Supervisors meeting on Thursday.

“We don’t anticipate it being on the agenda,” said Assistant County Administrator Don Robertson.

While any Board member can make a motion at the beginning of meeting to amend the agenda, neither Board Chairman Joel Acree nor Vice Chairman Dick Grice plan to push the issue.

“As of right now, that’s not an issue,” Grice said. “We have more important issues to deal with.”

He and Acree added that if the matter is brought up during the portion of the meeting reserved for public comments, there likely would be some discussion among Board members.

“If that becomes an issue, it will be addressed,” he said. “I’m not taking a stand one way or the other.”

“I look forward to hearing people’s comments on the matter,” Acree said.

He added that to-date, there hasn’t been citizen commentary during a board meeting regarding the monument since 2017 following the violence seen during the “Unite the Right” rally in Charlottesville that year. At that time, the decision was out of the county’s hands, as Virginia Code 15.2-1812 prohibited localities from removing any war memorials – including those pertaining to the Civil War – once erected.

Earlier this year, Virginia’s General Assembly revised this code to allow localities to remove, relocate, cover or add signage contextualizing any Confederate monuments they own — provided they first hold a public hearing on the matter. Per state law, this hearing must be scheduled no less than 30 days after it is advertised in a local newspaper.

Some neighboring localities, such as Surry and Franklin, have delayed even advertising such a hearing until after July 1 — the date the new law took effect — for fear of legal challenges should they act too early. Surry’s county supervisors voted July 2 to schedule their public hearing for 7 p.m. on Aug. 13, while Franklin’s City Council plans to discuss possible dates and times at its July 13 meeting.

The monument is located in front of the county’s circa-1801 courthouse, a building that now houses the county’s Board of Supervisors boardroom and its Planning and Zoning department offices. Erected in 1905 by the United Daughters of the Confederacy, it depicts a Confederate soldier atop an octagonal granite base and bears the following inscription:

“Isle of Wight’s loving tribute, to her heroes of 1861 to 1865. They bravely fought. They bravely fell. They wore the gray. They wore it well. Bright were the lives they gave for us. The land they struggled to save for us, will not forget its warriors yet, who sleep in so many graves for us. They bleed – We weep. We live — They sleep. Dedicated May 30, 1905. Glorious is his fate, and envied is his lot, who for his country fights and for it dies. There is a true glory and a true honor: the glory of duty done the honor of the integrity of principle.”

The monument is said to be the second-oldest Confederate monument in Virginia’s Tidewater region, and is listed as a contributing object in the courthouse complex’s listing on the National Register of Historic Places.

With Virginia now in Phase III of Gov. Ralph Northam’s reopening plan, Isle of Wight County has resumed its traditional procedures for citizens’ time comments, meaning those who wish to speak must sign up in-person prior to the start of each meeting and deliver their remarks from the lectern. The county is, however, still asking attendees to wear masks and socially distance themselves while in the boardroom.

State Sen. L. Louise Lucas is fighting a petition that has been circulating among Isle of Wight and Southampton voters... read more