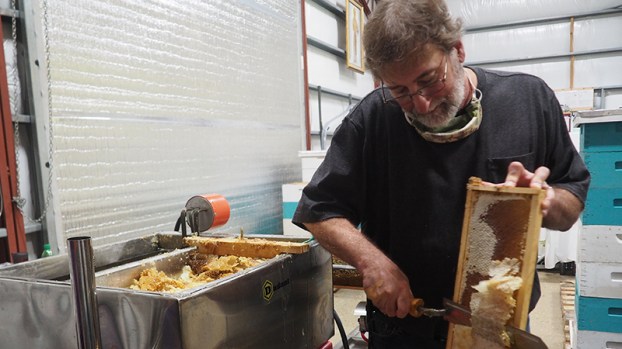 From honey to mead

On a rainy Saturday afternoon in June, Ed Schweiger can be found in a metal outbuilding on his family’s farm, using an electric heated knife to scrape beeswax from hive partitions into a rectangular metal tub.

From there, the wax will travel into a large vat, where spinning motion will extract the honey.

Beekeepers in Isle of Wight County are only able to extract honey from their hives twice a year, Schweiger explained – once in June from the bees’ efforts to pollenate flowering trees in the spring, and again around Labor Day in September from bees’ efforts to pollenate goldenrod, as well as cotton and soybean crops. Once extracted, the honey is put through a strainer, which leaves this pollen intermixed with the honey but extracts what Schweiger simply referred to as “bee parts.”

After this, the honey is ready to head to Schweiger’s bottling table, only this particular batch isn’t intended to be sold as pure honey. At least, not all of it. While Schweiger and his wife, Jajala, are partners in G&S Apiary with a neighbor, a good portion of this batch will be going toward the couple’s other home-based business: Serendipity Meadworks.

As the name implies, this business is all about making mead, an alcoholic beverage made from a mixture of water, honey and fermented yeast. Referenced in the epic poem Beowulf, it is thought to be one of the oldest, if not the oldest known alcoholic beverages, with Neolithic jars dating to 6000-5500 B.C., which contained the remnants of a mead-like substance, having been discovered in China.

Mead was once the beverage of choice in Medieval times, but has died out in much of the modern western world. It remains popular, though, in eastern European countries like Poland and among home-brew enthusiasts like the Schweigers.

According to Serendipity’s website, Ed’s journey into the home-brew industry began in 1978, two years after Congress passed legislation legalizing the production of home-brew and home winemaking in all states except Alabama and Mississippi. That was when the first home-brew shop in Ed’s hometown of Louisville, Kentucky opened. He spent that summer brewing various batches of kit beers, culminating with his brewing the beer for his class graduation party from the University of Kentucky four years later.

After graduation, Ed moved to Newport News to start a career working on nuclear reactors intended for submarines and aircraft carriers, and met a fellow home-brew enthusiast, who was also an avid Beowulf and J.R.R. Tolkien fan and convinced Ed to try his hand at mead. In the spring of 2004, Ed and Jajala, who goes by Jane, built a log cabin on farmland they had acquired in 1995 just outside of Smithfield, and soon after, partnered with a neighbor to begin beekeeping.

“Being a farm meadery, we produce our own honey,” Ed said.

Serendipity now has six partners, including the Schweigers. A seventh, Bobby Higgins, who was known to the couple as “grandpa” despite not being related to either, died in March 2019.

“He did the plumbing for the building in return for 1% of the business,” Ed said.

He’s also the namesake for “Grandpa’s Wild Orange,” a variety of mead Serendipity makes from wild flower honey from Florida. Serendipity released its first commercially available bottled mead in 2019 and plans to release a Christmas brew, made from orange blossom honey, ginger, cloves, nutmeg, cinnamon and vanilla beans, in November this year.

Brewing mead takes about nine to 10 weeks of fermentation, with about 300 pounds of honey needed to make 100 gallons, Ed said. Getting all the needed state and federal licenses also took time – about 1-1/2 years.

Currently, Serendipity sells its mead on-site in a showroom located inside the same outbuilding where the mead is made. Serendipity also sells at the Smithfield Farmers Market, Bon Vivant in Smithfield, Hilton Tavern and Cozzy’s Comedy Club. When COVID-19 arrived in Virginia, the company was restricted to pre-orders, but was allowed to resume on-site tastings when the commonwealth entered Phase 1 of Gov. Ralph Northam’s reopening plan.

“With Phase 2, we can sell at the markets but are not allowed to give tastings [at the markets],” Jane said. “We can also allow customers to consume our products indoors with social distancing rules in place.”

Serendipity is open Fridays from 1-6 p.m. and Saturdays by appointment.

Protests come to Isle of Wight

https://www.windsorweekly.com/wp-content/uploads/sites/62/2020/06/Dontae-Finney-IW-protest.mp4 The death of George Floyd while in the custody of Minneapolis police officers on May 25 has continued to... read more