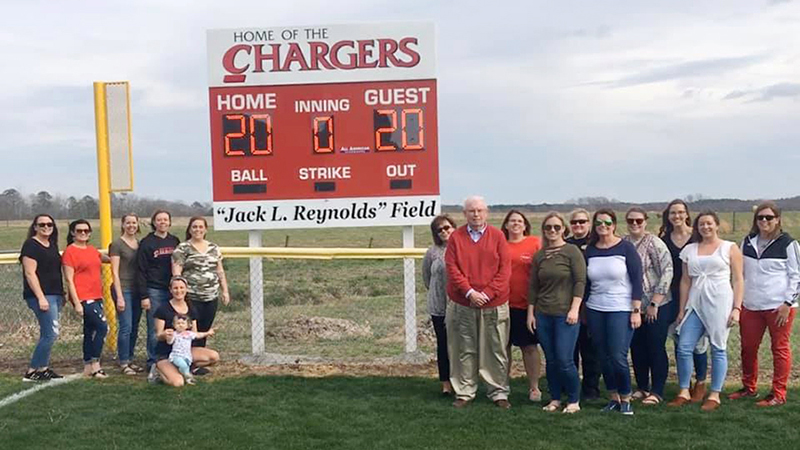 Some of retired IWA softball coach Jack L. Reynold’s former players joined him on the field for the dedication ceremony on March 13. The field is now named in his honor.

Jack Reynolds admits he had a bit of a learning curve when former Isle of Wight Academy Headmaster Benjamin Vaughan, in 1975, asked him to coach the softball program at the school. He had been coaching JV boys basketball at the school since 1971 but — as he confided to Vaughan at the time — had never played any high school sports himself.

“I enjoy sports, I just never played,” Reynolds said, recalling that during his first year as IWA’s softball coach, the Lady Chargers won only two out of 10 games. Since that time, generations of Lady Chargers have played for Reynolds over the course of his more than 30 years at IWA.

Though Reynolds retired in 2009, his legacy lives on at the school. Now, the Lady Chargers’ home field bears his name, having been officially dedicated as the “Jack L. Reynolds Field” on March 13.

“Because of his many accomplishments and contributions to our school, our teams and our many student-athletes, Mr. Reynolds will forever be known as the man who started the dynasty that today is known as Charger Softball,” said IWA’s current headmaster, Mark Munford.

Under Reynolds’ leadership, the Lady Chargers won their first state title in 1993, and would go on to win four additional state championships in 2004, 2005, 2006 and 2008, two of which occurred following undefeated seasons. Reynolds also recalls IWA winning the Metro Conference in 2000 with only one pitcher on the team — a seventh grader.

“I’m so thankful I’ve had this opportunity,” Reynolds said. “I give credit to the players.”

For the dedication ceremony, IWA invited several of Reynolds’ former players to join him on the field.

“Mr. Reynolds is more than a softball coach, he was a life coach,” said Dana Edwards, who played shortstop from eighth grade through her graduation in 1994, and later joined IWA’s staff as an assistant coach. “He loved and cared about us and wanted the best for us. He also knew how to be very tough.”

Casey Dixon, nee West, who played on the championship-winning teams in 2007 and 2008, graduating in 2009, also recalls Reynolds’ toughness.

“You either played or you didn’t — no excuses,” she recalled, also speaking fondly of Reynolds’ wife, Cora.

“Softball wouldn’t have been the same without him,” said Jordan Edwards, who also graduated IWA in 2009. “He always made us laugh in some way.”