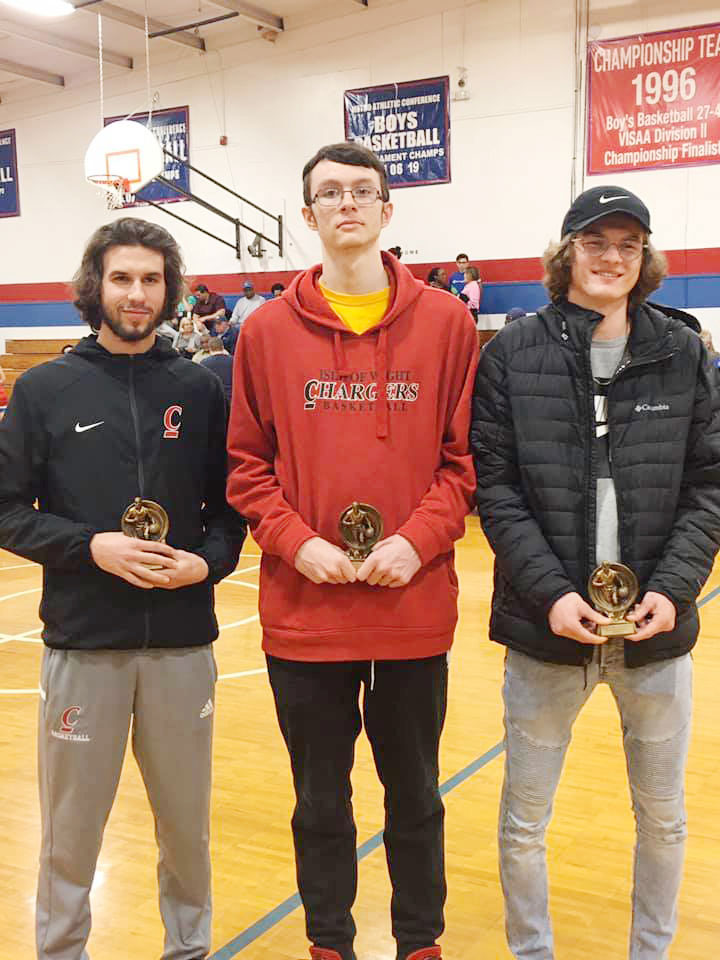 Seniors William Fricke and Grant Worthy were named to the all-conference team, as was junior Russ Wells, following the boys’ tournament at Shores.

• Williams, Jones and the Lady Chargers ended their season in the tournament semifinal round, losing to StoneBridge 39-32 on Feb. 21.

The Lady Cavaliers advanced to Saturday’s tournament final, where they were eliminated by Atlantic Shores.

IWA finished its season with a 10-10 record, including a 7-3 mark in the conference.

• IWA’s boys team closed out its season with a heartbreaking 75-73 overtime loss to Portsmouth Christian Friday on the Patriots’ home floor.

Zyon Moore’s 3-pointer with :10 left in overtime helped push the Patriots past the Chargers 75-73 in a Metro Athletic Conference Tournament semifinal at PCS. They were Moore’s only points of the contest.

Portsmouth’s Tim Montgomery, later named the conference MVP, also made a key foul shot with 2.6 seconds left to put his team up for good. An IWA shot went awry at the buzzer.

With 20 seconds remaining in OT, IWA senior Grant Worthy propelled his team into the lead, 73-71, with a three-pointer of his own.

PCS was leading 68-66 when Wells dunked over several defenders and was fouled on the play. The foul shot put IWA ahead 69-68 with 1:07 to play. A subsequent PCS turnover with 50 seconds to play have IWA the ball. Fricke made one of two foul shots with :45.3 to play to put IWA ahead by 2, 70-68, setting the stage for a Montgomery 3 with 32.1 seconds left.

IWA’s Russ Wells led all scorers with 29 points. PCS was paced by Noah Fesl and Montgomery, who each had 18.

Worthy led his team in scoring with 14 points. Broadwater’s Willie Holden led all scorers with 17 points for the Vikings.

The Chargers tied Broadwater, 9-9, in the first quarter, but powered past their opponents with a 14-0 run spanning into the second quarter, capped by a Worthy 3-pointer that made it 23-9.

IWA would need every point, leading by as many as 17 points, 45-28, following another Worthy trey. But the Vikings stubbornly kept the Isle of Wight lead under 10 points from that juncture.

Wells lead the Chargers in points scored with 399. Worthy was second with 329, edging Thomas with 313. Fricke, who missed several games mid-season with an injury, was fourth with 265 points.

• The Charger JV boys squad wrapped up a successful 18-5 season, including a perfect record in the conference to teams not named Atlantic Shores, with a 67-40 loss in the Metro Tournament final Tuesday.

The No. 2-seeded Chargers defeated No. 3 Portsmouth Christian 66-56 in the semifinal round on Monday, Feb. 17.

Trent Holland finished atop the team rankings for scoring average, with 10.8 points per game; freshman Peyton Shipman was a close second with 10.4 points per game.