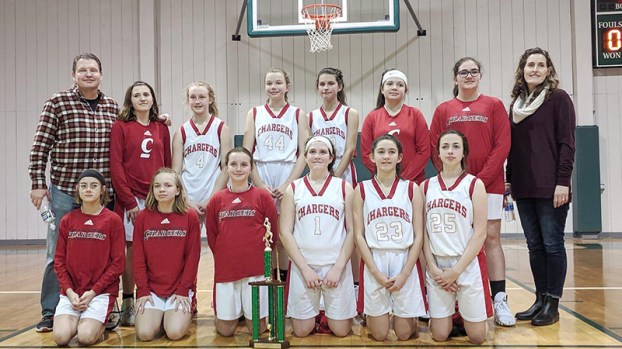 Members of the IWA JJV girls basketball team which advanced to their conference tournament final, before falling to Portsmouth Christian 22-20 in overtime.

Junior Russ Wells and senior Grant Worthy each had a game-high 17 points as Isle of Wight Academy upset visiting Atlantic Shores 68-59 before a Senior Night crowd on Thursday, Feb. 13, at Jester Gym.

The Chargers were 14-for-16 from the foul line in the fourth quarter and were 33-for-40 for the game.

The win by IWA was the second in as many seasons against Shores. They defeated the Seahawks 55-54 in the last game of the 2018-19 campaign.

Shores led 13-8 after a quarter, but IWA took the advantage on two Worthy free throws to make it 16-15 midway through the second period. The Seahawks cut the Chargers’ lead to 28-27, then tied the game at 29 with a minute left before halftime.

Shores retook the lead, 39-38, but IWA quickly jumped back ahead on back-to-back baskets by Wells that made the score 44-41 IWA with 2:00 left in the third.

IWA led the Patriots 17-12 after the first period, but a 13-1 run by PCS put the visitors ahead for good, 25-20, midway through the second quarter.

IWA could get no closer than 4 points, 29-25, on a 3-pointer by Jabari Thomas with 7:15 left in the third stanza. Then the Patriots scored 7 of the next 10 points to take a 34-25 lead with midway through sequence. From there, PCS was 15-for-17 from the foul line in the final quarter to finalize matters.

IWA holds two wins over the Vikings already this season.

The winner was scheduled play the winner of the quarterfinal between PCS and Gateway Christian at 7:30 p.m. on Friday at PCS. The boys tournament championship will be played at 7:45 p.m. today, Feb. 22, at PCS.

tee off in the Metro Tournament at 6 p.m. Thursday versus Denbigh Baptist at StoneBridge School.

The winner was scheduled to play No. 2 StoneBridge at 7:30 p.m. on Friday on the Cavaliers home court.

The tournament title game will be at 6 p.m. Saturday at PCS.

The winner of that game and the other semifinal between Broadwater/Shores, were to play on Tuesday at Shores at 6 p.m.

No. 3 IWA beat Denbigh Baptist 24-9 in a semifinal matchup.