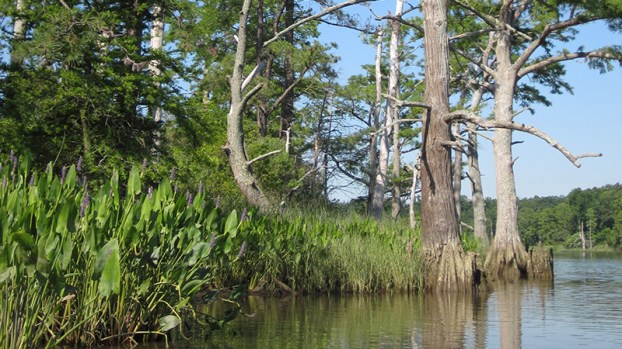 Bald cypress and pickerel seem to be around every bend.

Gray’s Creek worth exploring for an autumn adventure

A superb way to experience Southside native coastal plants is seated comfortably in a kayak paddling one of Virginia’s scenic waterways. So let’s select a local creek and consider plant behavior expected there during an autumn garden adventure on the water.

Gray’s Creek in Surry County is a deep water tributary of the James River, rising south of State Route 626 and flowing east to reach the James River southwest of historic Jamestown located across the river. This waterway is over six miles long and a part of the Capt. John Smith Chesapeake National Historic Trail. The mouth of the creek is located near the VDOT Scotland Ferry Landing and is home to the Surry County Marina.

Shoreline vegetation is in late season bloom. Around every bend in the creek there is a clump of swamp sunflowers haloed in bright yellow blossoms while masses of pickerel weeds topped with cornflower blue flowers try to outperform. As bald cypress balls form, the leaves of the dogwood tree are starting to turn multicolor. While ironweeds showcases fluffy purple heads, wild touch-me-not plants threaten to spew seeds from the water’s edge.

Not only is this creek notable for sensational plants, but also consider its history along with the horticulture. Gray’s Creek was a significant water highway for inland Native Americans and early colonists to navigate to the James River for fishing, hunting and trade. The eastern side shoreline property is part of Chief Powhatan’s dowry land endowed for Pocahontas’ 1614 marriage to John Rolfe.

English settlement along Gray’s Creek began by 1609 when Capt. John Smith ordered a defensive fortification called the “New Fort,” built on the tidal creek opposite Jamestown. The fort was never completed, but the earthworks of the fort remain visible high on the eastern bank overlooking Gray’s Creek.

Gray’s Creek was first named Smith’s Fort Creek and then Rolfe’s Creek. By circa 1639 it became known as Gray’s Creek for Thomas Gray who patented land at the mouth of the creek. Gray was the son-in-law of Jamestown Governor Sir Thomas Gates.

A Maltese cross was placed on Gray’s Creek during Capt. John Smith’s period of exploration in the Chesapeake Bay. The exact location of original placement is unknown, but thought to have been placed in the fork of the Dark Swamp area.

Virginia’s Department of Conservation and Recreation will soon be conducting a study of Gray’s Creek to see if this waterway meets the criteria for designation in the Scenic Rivers Program. This program is designed to identify, designate and help protect rivers and streams that possess outstanding scenic, recreational, historic and natural characteristics of statewide significance.

For a listing of Virginia’s designated waterways, look to dcr.virginia.gov.

By Kristi Hendricks Searching for an autumn garden adventure highlighting horticulture, architecture and history to boot? Then the Sept. 28... read more