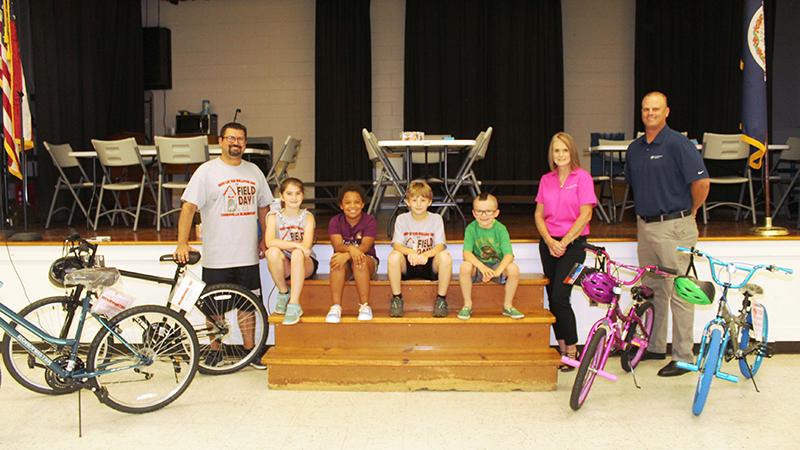 Carrsville Elementary student winners of the bicycldes are, seated from left, Jocelyn Busch and Breanna Burden, Christopher Mohrmann and Aiden Martin. With them on the left and right are then-Principal Clint Walters and Community Electric Cooperative representatives Cindy O' Reilly and Daryl Walls.

The tension mounted at Carrsville Elementary School and Principal Clint Walters milked it for all it was worth. As 250 students watched breathlessly, Walters announced the winners of a bicycle giveaway for outstanding achievement, sponsored by Community Electric Cooperative.

“It’s a first grader …” Walters said, digging deep into a bucket of names to pull the winner. Anticipation built. “… in Mrs. [Sandy] Jones’ class.” More anticipation and then silence.

“Breanna Burden!” Walters announced as the gleeful winner walked to the stage amid cheers to claim her new bicycle.

That happy scene was repeated several times on June 7 as Community Electric held its annual bike (and matching safety helmet) giveaway at Carrsville Elementary and Windsor Elementary School for students who achieved reading and other academic successes.

“We always say that Community Electric Cooperative is much more than just a service provider,” said president and CEO Steve Harmon. “We work every day to bolster our communities and the members we serve, and there are few better ways of doing that than to reach out to school children and encourage their reading and their studies.”

Students in grades K through second at Carrsville got an entry slip for completing 30 minutes of reading outside of school every day, while students in grades 3 to 5 got entries for each Standards of Leaning test that they passed. Consistency in the reading program was the determining factor for entries in all grades at Windsor Elementary, so students had multiple chances to win.

“This is such a wonderful program,” said Ellen Couch, principal at 570-student Windsor Elementary, who drew out the suspense much like Walters. “We usually keep the bikes up front on the stage so when they come to the cafeteria, they see them. A lot of the students will come up and say, ‘I read for my bike. I read for my bike.’ ”

The shiny bikes were purchased by Tidewater Energy Services, a subsidiary of Community Electric. Four were given away at each school — for grades K-2 and again for grades 3-5.

Kristy Vaughn, a kindergarten teacher at Carrsville, said the bikes represent “a bonus” above and beyond the medal that students get every nine weeks for successful reading. “It’s something to get very excited about,” she said.

The Carrsville Elementary winners were Aiden Martin and Breanna Burden in the younger group, and Christopher Mohrmann and Jocelyn Busch in the older group. Each eyed the shiny, new bike, and agreed to always wear the new helmet that came along with it.

But given the amount of pages that kids turned in the quest for a new bike, it’s safe to say everyone was a winner.

JESSICA PARR is a spokesman for Community Electric Cooperative, headquartered in Windsor, is a not-for-profit member-owned energy provider that serves over 11,000 homes, farms and businesses in the counties of Isle of Wight, Southampton, Surry, and Sussex and the City of Suffolk. For more information, go to www.comelec.coop.