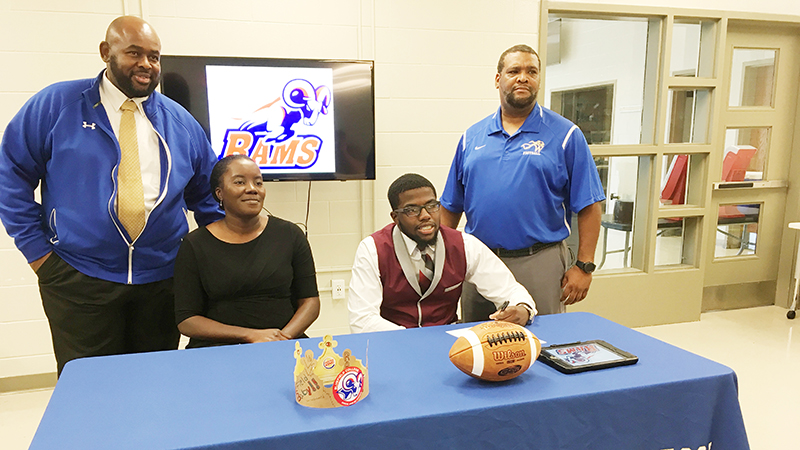 Coaches Tyler Mosley, left, and Cal Kee join with Consuelo Ricks-Britt and her son, Xavier L. Ricks, after his signing.

The Rams of Bluefield College in Virginia will be getting additional strength when Windsor High’s Xavier Larenz Ricks joins the school and, most notably, its football team this coming school year.

A signing ceremony took place at the high school in late May. He was accompanied by his mother,  Consuelo Ricks-Britt.

Tyler Mosley, head coach of the Dukes’ football team, praised his former player for the strong work ethic on and off the field, especially academically. Mosley added that Ricks didn’t make excuses, “never gives up” and that he was “a real good young man.”

The new recruit to the Rams said afterward that he wasn’t aware he was being looked at for consideration, but is obviously pleased.

Asked to recall a highlight in his football career at Windsor, Ricks immediately said it was beating Surry High School at its homecoming.

His mother said her son will be getting $28,000 in scholarships and grants. That money also includes $4,000 to play football at Bluefield.

The graduation ceremony at Windsor took place on Friday evening.

Ricks is also the son of Ruben Murphy and Gregory Britt.