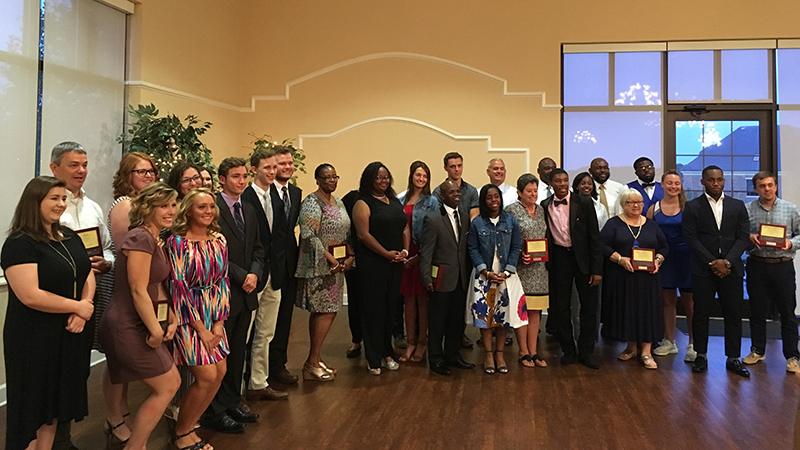 Windsor and Smithfield high school seniors with the teachers they named as inspirational in their lives. The fourth annual banquet recently took place in the Smithfield Center.

Eight seniors at Windsor High School recently had the opportunity to publicly thank instructors who have been especially inspirational in their lives. The students chosen were those who had been named  as Senior of the Month, having been recognized for achievements in academics, athletics or involvement at WHS or even in the community.

This was the fourth year that Dukes, as well as the Packers from Smithfield High School, came together for the occasion, which was in the Smithfield Center.

First to sing praises was Gunther Perkins, who named Virginia Beatty Riffle as “much, much more” than just a teacher.

“She’s been a fantastic mentor through high school theater, which allows students to express themselves freely,” said Perkins, who acknowledged that before learning forensics or theater from Riffle, he had “an innate difficulty” in communicating. Within two years he had not only improved his articulation, but became comfortable enough to participate in plays.

“She helped me discover my passion in theater, and honed leadership skills,” said he.

Maria Tumminello called Maggie Halstead as a “an extraordinary woman. She’s been a teacher, coach, mentor, my go-to person, my school mom. Her class is a place that people want to be.” Looking at the honoree, Tumminello said, “Every day you come in smiling. You are a guiding light and made a significant impact on me.”

Rachel Brock said English teacher Luann Scott has also been “so much more than a teacher. In two short years you’ve become a second mother.”

With some emotion in her voice — as there was with so many other seniors in their turn — Brock also said of Scott that she actually cares about her students, and that she has a “high personal level of expectation. It’s an understatement to call her a teacher. You will forever be so much more than a teacher.”

“I see a change in myself. Coach Mosley put upon my shoulders to make sure all the players were stretched and ready for training,” said Ricks. “If not for you, I would not be the man I am today.”

Leyda Sanders, who was the senior for February, said the occasion was “not about my self and accomplishments, but about the people who helped me to get where I am today.”

Of Broc Smith, the band teacher for both Windsor and Georgie D. Tyler Middle School, Sanders said he “gave me the opportunity for leadership. He brightened my leadership abilities.”

Avery Williams said history instructor Sharon Harrell is like “an amazing tough and loving mother who taught me how to have a sense of humor. She brought history to life.”

Williams added that Harrell helped him to appreciative people.

Ashtyn Kiser told cosmetology teacher Danielle Gibson that taking her classes was “The best decision I’ve ever made. I am now a licensed cosmetologist.”

Having said that she had been diagnosed for Attention-Deficit Hyperactivity Disorder, Kiser said that Gibson helped her to stay focused.

“I’ve spent more time with her than my family. I can tell she wants me to be my best even outside class.”

Cierra White said that Sherry Ashburn has been “so much more than a coach. She’s a second mom to so many at school.

“You made Windsor a second home and pushed me to strive to be better,” White told her. “I am very privileged to form such a bond.”