IWA golfers do well in tournament 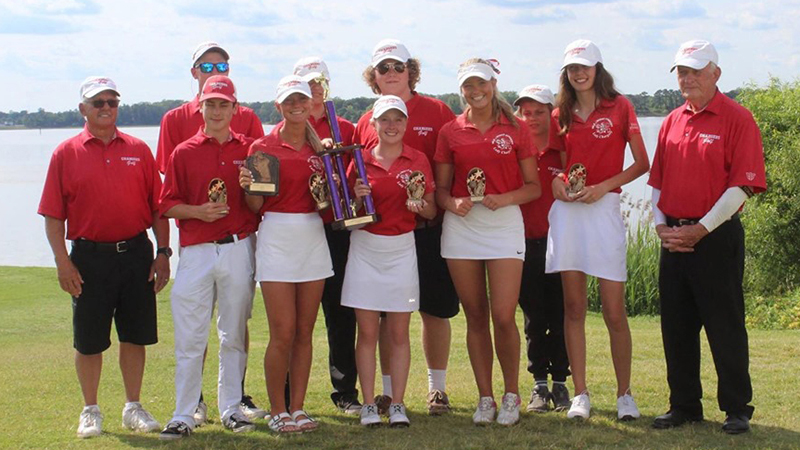 The Isle of Wight Academy golf team played at the Williamsburg National Golf Club on Monday. As a team, the Chargers came up nine shots shy of the team title. IWA finished with 333 strokes as a team, 108 shots better than second-place Hampton Christian.

Davies birdied three of the first nine holes and bogied three on the back nine to finish as the only player at par or better.

As a team, the Chargers came up nine shots shy of the team title. Steward School of Richmond was the eventual state champion by a margin of 316-327.

The Chargers also claimed the Metro Conference Varsity Tournament on May 7 at Sleepy Hole Golf Course in Suffolk. Grimes was the top finisher in the tournament.

IWA finished with 333 strokes as a team, 108 shots better than second-place Hampton Christian.

Due to rain on Monday, the varsity boys play-in game between No. 8 IWA and No. 9 Fredericksburg Christian was to be played at 1:30 p.m. on Tuesday at Miller School in Crozet. Winner plays No. 1 Miller at 4:30 p.m.

IWA defeated Trinity Christian last year in the state play-in game and was defeated by No. 1-seeded Miller 10-0 the following day.

The girls varsity softball team was to host Atlantic Shores at 4:30 p.m. on Tuesday in the quarterfinal round of the VISAA Tournament.

The Lady Chargers claimed the state Div. II title a year ago.

The team defeated Blessed Sacrament-Huguenot 4-0 in a state semifinal on Wednesday.

The Chargers finished with 101 goals scored on the season and a perfect 15-0 record. They were ranked 186th in the country and 17th in Virginia among schools reporting stats to the website Maxpreps.

The IWA JV Soccer Team finished 10-0, outscoring our opponents over the course of the season 68-5, including seven shutouts.

All players from the sixth through 10th grades contributed during the season in practices and games. Particularly noteworthy was the leadership and dedication of co-captains Connor Lanthorn and Tyler Collie, according to Coach M. Heath Henderson.

The Chargers baseball squad was 1-2 on the week, defeating Broadwater Academy in conference tournament semifinal last Thursday before falling to Atlantic Shores 6-0 in the final on Friday. IWA also was vanquished by Fuqua on Monday in a non-conference game.

IWA had been ranked in a seventh-place tie with North Cross, but was demoted to eighth place and into the host’s role for the play-in game with No. 9 Fredericksburg.

The Chargers had finished in a tie with Atlantic Shores for the regular-season conference title based on a split with the Seahawks.