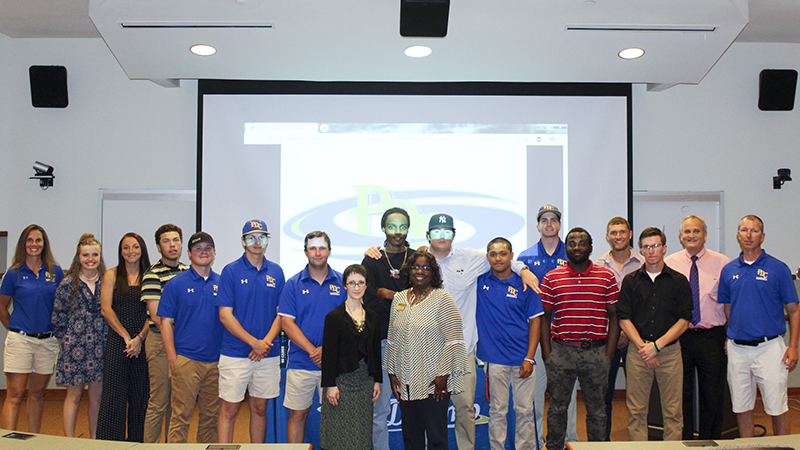 PDC Hurricanes softball coach Carrie Hoeft, far left, and baseball coach David Mitchell, far right, with players who will be leaving the team after the season ends. They were recognized during the banquet that took place in the college on Monday evening. Mitchell himself will also be leaving and going to teach at Isle of Wight Academy.

Saying he needs balance back in his life, David Mitchell confirmed on Monday he’s decided to step down as athletic director and Hurricanes’ baseball coach at Paul D. Camp Community College. Mitchell also works in the admissions department. But that AD post won’t be vacant for any measurable length of time as Carrie Hoeft, who oversees the fledgling softball program, has been named the college’s new athletic leader. This will become effective as soon as the season ends. A decision about the next coach of the Hurricanes baseball team will be made later.

Mitchell said the demands of all three positions had him working seven days a week and often on the road, severely limiting the time to be with his own family. Next fall, though, he will be teaching at Isle of Wight Academy, and serving as the new baseball coach also be a part of his responsibilities. Since both his 7- and 14-year-old sons will be attending the school, that will enable them to spend quality time together.

“I’m grateful for the opportunity [college president] Dr. Dan Lufkin gave me to help fulfill his vision. Real thankful he gave me the keys to the car. I learned a lot as a coach.”

In addition to the new post, Hoeft will continue to oversee the softball program.

“Coaching is my passion,” she said.

Mitchell said of her, “She is the perfect person to step into this role. This will be a seamless transition. Carrie’ll do a fantastic job as athletic director. She has the knowledge and experience.”

In turn, Hoeft commended him.

“David has been an amazing mentor. I’m really excited about moving forward,” she said, adding that men and women’s soccer programs are to be added this year.

Both coaches are pleased by how well their respective teams have done this year. Hoeft’s softball team, in its first year in existence, is fifth in the conference and 21-15 overall. The Division II Region 10 Tournament takes place in Burlington, North Carolina, and lasts from Thursday through Saturday. The Lady Hurricanes opened tournament play as the sixth seed against Pasco-Hermando State College out of Florida on Thursday. The winner of the tournament will move on to the national championship tournament in Clinton, Mississippi, later this month.

The winner of the men’s tournament advances to the national championship tournament in Enid, Oklahoma.