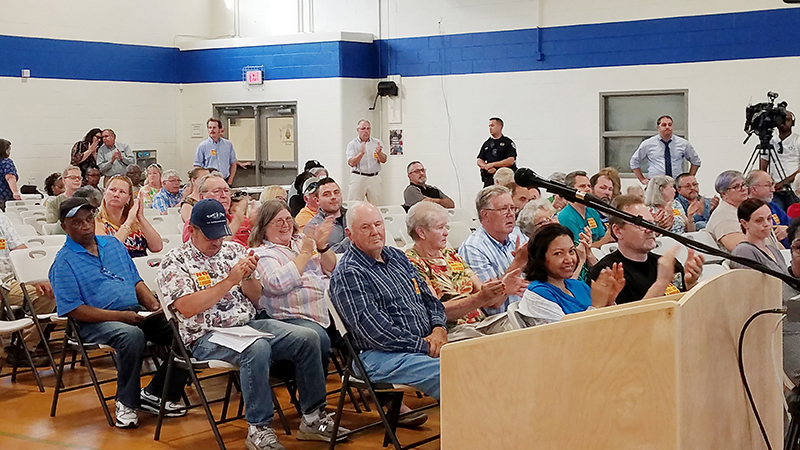 Isle of Wight County residents applaud after Board of Supervisors Chairman William McCarty’s motion to rescind the county’s support of a 60-bed juvenile justice facility passes, 3-2.

When it came time on Thursday for Isle of Wight County Board of Supervisors Chairman William McCarty to cast his vote on a motion to approve a final contract between the county and the Virginia Department of Juvenile Justice — which would have deeded 20 acres of land in the county’s Shirley T. Holland Intermodal Park to the state for the construction of a 60-bed juvenile correctional center — the matter had stood at a 2-2 tie.

Smithfield District Supervisor Dick Grice had made the motion, and he, along with Hardy District Supervisor Rudolph Jefferson, had voted in favor of final approval. However, Windsor District Supervisor Joel Acree and Carrsville District Supervisor Don Rosie both felt obliged to heed the wishes of many living in the southern and central parts of the county, who, for months, have been vocal in their opposition to the proposed DJJ facility. At 6:45 p.m., McCarty voted with Acree and Rosie, making the final vote 3-2 against approval. A few minutes later, McCarty also motioned that the Board withdraw its support for the DJJ project, which also passed 3-2 with Grice and Jefferson dissenting.

McCarty, who had voted in favor of deeding the land on Feb. 21, contingent on reaching a final agreement with the state, did not say what specifically had made him change his mind about the project, only commenting that, “I am my own person” and “at the end of the day, you live here.”

However, Acree, speaking to Windsor Weekly after the vote, said he was “not shocked” when McCarty voted the way he did.

“I’ve known Mr. McCarty for a while, almost four years,” Acree said. “I know him to be a very reasonable man.”

McCarty made similar remarks regarding his fellow board members, calling all “men of integrity.” He also objected to what he described as “personal attacks” from county residents directed at Board members and their families, which he said included “things even said to my own children.”

“Mr. Grice, I know, to be a man who looks at things through an absolute business perspective, I respect that,” he said. “I vehemently object to the things that have been spewed over this community about these men. I’ve even gotten emails from folks quoting Scripture at me.”

Prior to the votes, a final update on the county’s negotiations with the state was presented by County Administrator Randy Keaton, incoming DJJ Director Valerie Boykin and Joe Damico, director of the Department of General Services, which is the agency that would have handled the construction of the DJJ facility.

Damico said the state was prepared to reduce the county’s contribution toward the cost of a $1.5 million water and sewer extension down Walters Highway (U.S. Route 258) from of $500,000 to $50,000. This would have been in compensation for the decrease in usable land in the intermodal park resulting from the county’s recent wetlands assessment, and the reported value of the land that would have been gifted.

When asked if the votes that evening meant that the DJJ project was defeated, or if the county would choose another location in the county for the facility, Assistant County Administrator Don Robertson said he was under the impression that the former was the more likely scenario, given that the Board had withdrawn its support for the project. However, the state’s 2018-2020 biennial budget, which includes funding for the facility, still includes language stating that it will be built in Isle of Wight County.

Carrollton resident Albert Burckard, who spoke during citizens’ time that evening, asked the Board to consider locating the facility in its Smithfield, Carrollton or Rushmere areas. County resident Darrel Mayo, who volunteers at correctional facilities for adults and juveniles, also felt that the proposed Isle of Wight County facility would still be “a great opportunity” for county residents “to show love and compassion to those less fortunate.”

Later that evening, RISE for Youth Executive Director Valerie Slater, who had spoken on behalf of her organization against the proposed facility at a previous Board meeting, released the following statement:

“Tonight’s vote was a win for Hampton Roads’ most impacted youth, their communities and for the people of Isle of Wight County. We know that youth have a better chance to thrive when they are able to receive the support and care of their families and communities. A better approach to youth justice starts with rejecting the old model, which is based on remotely located facilities that isolate youth and just don’t work. Tonight, we are hopeful that local and state leaders will continue to engage and listen to their communities, who overwhelmingly support rehabilitation over incarceration.”