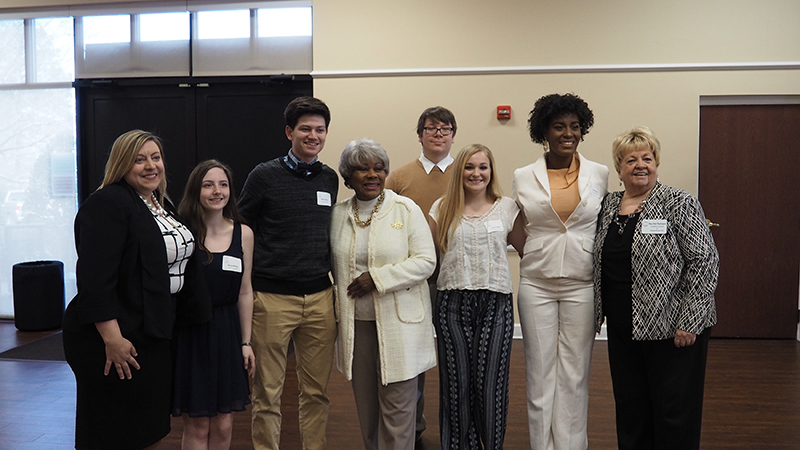 First to speak was Christie Craig, chief of staff for Cosgrove, who said the senator had filed 21 pieces of legislation this year. One of his bills, which did not pass, she said, would have allowed retired law enforcement officers to accept employment by a local school division as a school security officer without losing their Virginia retirement system benefits. This, she said, got tied up in the House Appropriations Committee.

One of Cosgrove’s bills that did pass, however, requires registered sex offenders who enter schools when they are being used as emergency shelters to inform law enforcement of their presence in the facility. This bill is awaiting Gov. Ralph Northam’s signature.

“You’re not segregated; you just have to let them know if you’re in the school,” Craig said.

Another bill of Cosgrove’s that passed and is awaiting the governor’s signature waives the requirement that school divisions provide additional teaching days or hours to compensate for school closings for up to five teaching days, which result from an evacuation directed and compelled by the governor. An example: The days lost in 2018 when schools closed due to Hurricane Florence being forecast to hit the Hampton Roads area. It also states that there shall be no proportionate reduction in the amount paid by the Commonwealth from the Basic School Aid Fund or the amount paid by a local governing body in such an instance.

Marybeth Washington, legislative assistant to Tyler, said the delegate had introduced House Bill 1833, which allows a pre-sentence report to be made available for review to an incarcerated person eligible for release by the Virginia Parole Board or to such person’s counsel. This passed the House and Senate unanimously, was signed by the governor in February, and will take effect in July.

Washington also mentioned House Bill 1802, which authorizes vehicles hauling forest products such as logs to use amber warning lights approved by the superintendent of state police, provided said lights are mounted or installed as to be visible from behind the vehicle. This too passed the house and senate, was signed by the governor in February, and will take effect in July.

Tyler was also involved in the General Assembly’s efforts to include a 5 percent raise for public school teachers in its biennial budget, Washington said. This means that school divisions statewide must give raises averaging 5 percent over the 2-year budget cycle.

Next to speak was Lucas, who also mentioned the 5 percent raise for teachers, as well as funding for additional guidance counselors at public schools in the General Assembly’s budget. She added that this session, she was finally successful in passing what she called her “signature piece of legislation for the past 24 years,” this being the authorization of casino gaming in Virginia. Senate Bill 1126, which she introduced, allows casino gaming in certain cities, pending a referendum to be held in each city to determine whether its residents want a casino. The cities being considered for casinos are Bristol, Danville, Norfolk, Portsmouth and Richmond. This bill passed the Senate 28-12 and passed the House 64-33. It is awaiting the governor’s signature and must be signed by midnight on Tuesday, March 26, to become law.

Last to speak was Brewer, who said she has continued her work on Virginia’s adoption and foster care system by forming what she described as a nonpartisan foster care caucus. This, according to a January article in The Richmond Times-Dispatch, is a group of lawmakers — some Democrats and some Republicans — who will focus on passing laws and funding the costs to reform Virginia’s overwhelmed system of caring for some of the commonwealth’s most vulnerable children. Brewer chairs the caucus along with Sen. Monty Mason (D) of Williamsburg.

One such foster-care-related bill she introduced was House Bill 1730. This requires local Social Services departments to request a security freeze on the credit report or record of any child who has been in foster care for at least six months in order to prevent cases of identify theft and misuse of personal identifying information, and to remove said freezes upon the child’s removal from foster care, upon the child’s request if the child is at least 16 years of age, or upon a determination that doing so would be in the best interests of the child. The bill also requires the local social Services departments to conduct annual credit checks on all such children between the ages of 14 and 18. This passed the House and Senate unanimously and is currently awaiting the governor’s signature.

One of Brewer’s bills that didn’t pass was House Bill 2326. This would have added maintenance of primary evacuation routes to the factors that the Commonwealth Transportation Board must consider during the statewide funding prioritization process known as Smart Scale. Brewer said it was her intent to help secure funding for rural roads such as Routes 460, 58 and 10. However, this bill never made it out of the House Transportation Committee.

“Our roads don’t have the capacity to qualify high enough for [Smart Scale] funding but if a million residents of Hampton Roads need to get out of the region, they might be going the back way through Isle of Wight and Surry,” she said.

She added that, “While Congress might be a total mess, in Virginia, we still get the people’s business done.”