Review: The Kid Who Would Be King 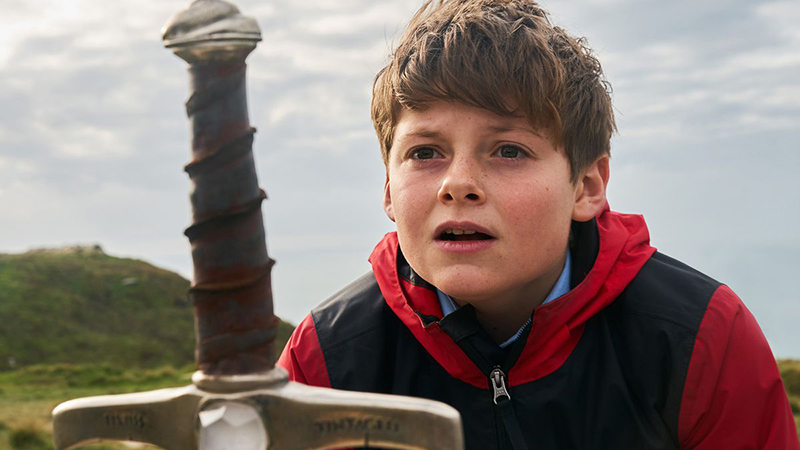 I miss movies like “The Kid Who Would be King.” I seriously got such a sense of nostalgia while watching this movie for those that ruled my TV as a kid, such as “A Kid in King Arthur’s Court” and “Matilda,” wholesome films focused on kids finding their own powers within themselves. Besides big budget favorites like “Harry Potter” and “Percy Jackson” (which themselves are even starting to be a bit dated), it’s hard to think of similar live action fantasy-based movies for kids these days. Hopefully with the positive feedback from critics and a :fingers-crossed: large box office, director Joe Cornish will usher in another wave of fantasy-inspired movies for kids that can spark creativity and build positive role models.

12-year-old Alex (Louis Ashbourne Serkis) and his best friend Bedders (Dean Chaumoo) aren’t what you would consider the cool kids in school and are constantly bullied. One day, as Alex is chased by his tormentors, he hides in an abandoned construction site and unsheathes a sword in a stone. It doesn’t take long before he discovers he is actually holding Excalibur. Soon after, Merlin (Angus Imrie) arrives in present day London, claiming Alex is the only one that can prevent the world from ending now that King Arthur’s evil half sister, Morgana (Rebecca Ferguson), has risen from her captivity. Now it’s up to Alex and his band of knights to save the world.. all while going on some awesome adventures!

Along with its nostalgic tone and imagination, what I love most about the movie was its diverse cast. It’s really special that the filmmakers created a movie that will allow kids from around the world to see themselves on screen. With mesmerizing performances from the child actors, especially standouts Dean Chaumoo, Angus Imrie, and Louis Ashbourne Serkis (yes, Andy Serkis’ son), I was already seeing kids start acting out the movie in theaters. Full disclosure, if I heard one more kid do Merlin’s clapping, snapping magic routine I was going to lose it. I imagine teachers and parents are going to have a lot of fun with that one.

Being an Anglophile, I also appreciate the film as a love letter to England, highlighting iconic English landmarks and the countryside through sweeping, panoramic shots. The fact that the script modernizes probably the most classic English legend is also an important contribution that will hopefully get younger generations interested in their own history and the story of King Arthur.

The few problems I have with the film are its length (I think about 15-20 minutes could have been cut) and that I felt Rebecca Ferguson was vastly underutilized as the villain. For someone who was supposed to be hell-bent on destroying the world in a matter of days, the kids never really seemed to be in a huge amount of danger. Being a huge fan of Ferguson’s work, especially her performance in the “Mission: Impossible” franchise, and the fact that Morgana was the major villain in the film, I expected her role to be longer than 15 minutes. In the few minutes she was on-screen, I did love what she did with the role, skirting the line of being creepy and menacing without going too far over the top. Pretty sure this is the performance Eddie Redmayne was going for in “Jupiter Ascending.” I should also add that despite its PG rating, some of the scenes may be a little too intense and scary for kids under 8 years old, so use your best judgment.

As winter is usually the dumping ground for studios’ worst movies of the year, “The Kid Who Would be King” was a pleasant surprise. If the audience in my theater was any indication, I think this film will energize the imagination of its target audience and will hopefully usher in some more live action movies in this genre.