Windsor Duke invited to race Down Under 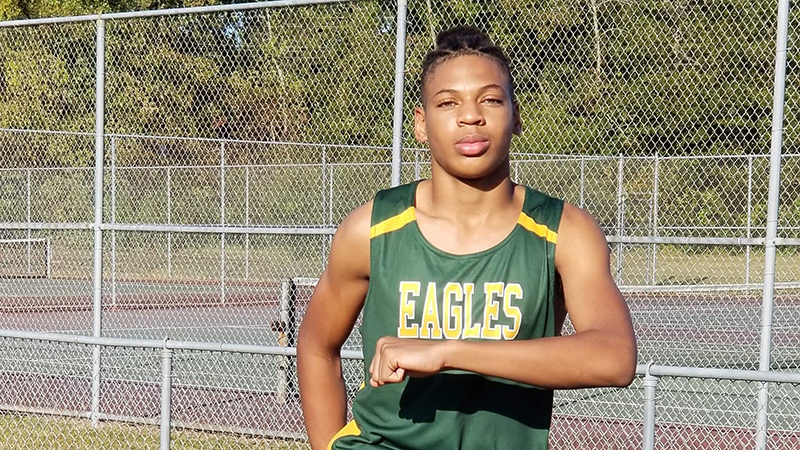 Terrell Pittman when he was a freshman track runner at Greensville County High School last year. Now transferred to Windsor High School, he intends to make an impression here as well in both the field and classroom.

A Windsor High School sophomore’s passion for running has been such that he was selected last year to potentially race in Australia this July. Terrell Pittman has been invited to participate in track and field at the Down Under Sports Tournaments. That offer actually came to him while he was a freshmen at Greensville County High School.

“A friend convinced me to do it [try out for track,”] Pittman recalled of his start as a freshman. He took to the sport right away. “It’s an adrenalin rush. I focus on the finish line only.”

Assistant Coach Timeka Whitehead-Blick agreed in her recollection of the enthusiastic runner.

“He was great. He came out for the first time to the track. The friend didn’t show, but he came out anyway. Did the hurdles right from the start, did all the drills and ran at other schools. He took off with it literally. He really did excel. He’s phenomenal. I can only see him doing greater things over the next couple of years.”

She confirmed that the invitation came last year. Evidently a talent scout for Down Under Sports had witnessed Pittman’s work on the track last June, and was sufficiently impressed.

“We were very thrilled,” Whitehead-Blick added. “That a great honor. I’m proud of him.”

His track honors include coming in first in district and regional, and third in state for AA Division.

In addition to track, the young Duke plays shooting guard and small forward for the basketball team, and is thinking about trying out for football next season.

“It depends on how well I manage my schedule,” said Pittman, who said he’s also earned a 4.1 GPA.

In addition to his plans of attending college, he is already figuring on becoming an attorney.

Meanwhile, a different kind of hurdle looms before Pittman if he’s going to represent Virginia in the games Down Under. He has to raise a total of $9,000 for the 10-day trip along with his mother, Qua’Shelia Turner. One half the amount is due by Wednesday, March 20, and the remainder by Wednesday, May 15.

Naturally, his mother is more pleased and proud than she can say about Terrell and his siblings.

“As a single mother of five boys, they’ve all exceeded my expectations,” she said, adding that one of his former teachers, Miss Little, said of Pittman: “I’ve always believed in him. This young man is special. He excels in every subject.”

Turner did not fail to credit all this to her Lord.

“This never would be possible without God. I’ve got to give it to Him,” she added.

“It really means a lot to me to represent Virginia and the U.S., and compete internationally,” said Pittman. “That’s just great to me. It’s a blessing.”