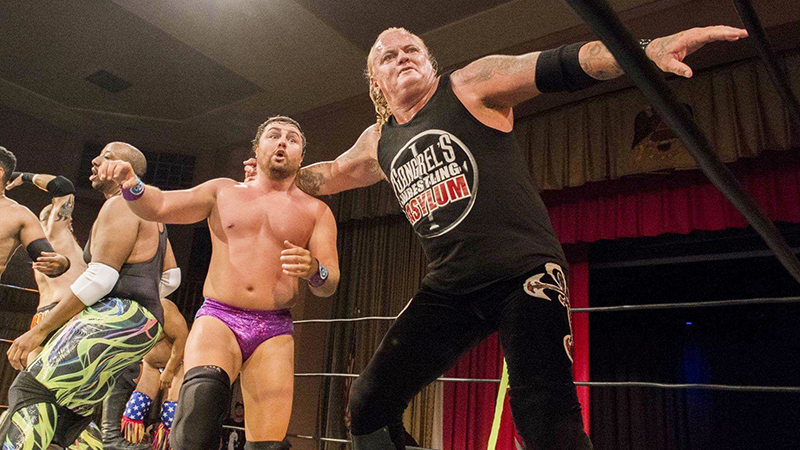 Vampire Warrior Gangrel seems to have control of where Brandon Scott is headed in the ring. See them compete live at Windsor High tonight. Doors open at 6 o'clock. All money from the VCW show benefits the school's wrestling team.

Windsor High School’s wrestling team is getting a major boost with the first-ever appearance by members of Vanguard Championship Wrestling tonight, Jan. 5, in the WHS gymnasium, 24 Church St. VCW heavyweight champion Brandon Scott and Vampire Warrior Gangrel will be featured in the

What makes the show even more noteworthy is that, according to VCW promoter Travis Bradshaw, 100 percent of the sales for tickets and concessions will toward the school team. The Dukes’ coach, Sumner Bradshaw, who also teaches art, confirmed this unique fundraiser. The money raised will be for equipment and travel to matches at other schools.

Travis Bradshaw, no relation to the coach, said Sumner came to a couple of the events and asked about such a visit at Windsor.

“It was a very good meeting for both of us,” said Travis, who added that VCW has done other fundraisers such as for the Salvation Army in Suffolk. “We love to entertain. We’re all for it,”

Formerly known as Virginia Championship Wrestling, the organization began in 2002. Travis said it’s an independent one with no affiliation with other wrestling groups, such as the WWE network. VCW has used talent from that company, but only when members such as Gangrel became independent.

Of course, he and Scott will not be the only wrestlers. Travis stated there are other matches leading up to the main event:

Coming to town is a homecoming for Travis, having graduated from Windsor. While still in high school, he got interested in the sport, though never as a wrestler himself.

“First I was a ring announcer at 17, and did talent relations and worked as a co-promoter. Now I’m strictly broadcasting and promotion,” Travis said.

“I love everything about it,” he continued. “The entertainment value. The showmanship, pageantry and magic. There’s nothing else like it. It’s my life’s work.”

One of the wrestlers who can attest to that attraction is Brandon Scott himself.

“I started at 4 years old going to World Championship Wrestling shows with my dad — it bonded us,” he said. In fact, Wayne Scott still attends as many of his son’s matches as possible, and is planning to be at the one tonight. Brandon’s brother often attended in the past, but later “grew out of it.”

Not for Scott, though. He fell in love with the sport (“This is what I want to do!”) The self-described skinny and shy 17-year-old’s interest only got stronger. His father signed him up to train, which of course reinforced the passion. The break came when his trainer asked Scott if he was ready to wrestle one evening.

His competitor was a female, Ferrari. Scott’s gimmick then was a mask and moniker as “The Amazing Pat,” and they wrestled before 40 to 50 people. He later stated in a text: “She won. I lost. LOL!”

“After that, I was hooked. I’ve spent 13 years of my life wrestling,” said Scott, who turned 30 this past fall.

In case you were wondering, he does have a day job in the Harrisonburg area where he lives, but Scott’s wrestling career has taken him around the state, including the Greater Hampton Roads region, especially in Hampton, Newport News, Norfolk and Suffolk.

“I’ve performed for the WWE a handful of times: Monday Night Raw, Smackdown and 205live,” he said.

A highlight in his wrestling career has been to participate in the National Wrestling Alliance’s Heavyweight Championship against Nick Aldis.

“That meant a lot to me,” said Scott.

Find out for yourself what draws people such as him to the sport.

Each seat costs a $20 donation; there’s a $5 discount for WHS students when they show their ID.