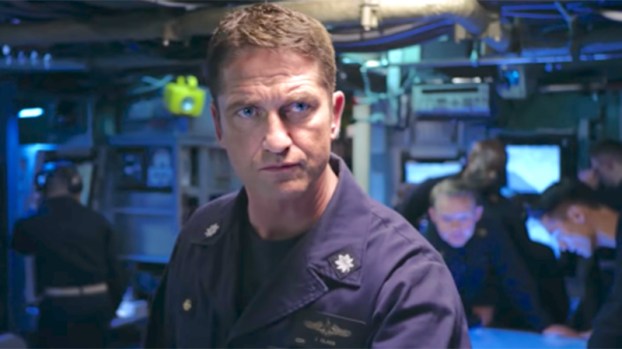 Our interview with Gerard Butler For ‘Hunter-Killer’

Gerard Butler hopes his new film, “Hunter-Killer,” will break the waves on a new era of submarine movies, reminiscent of the days of “The Hunt for Red October” and “Crimson Tide.” And lucky for us, he came to town to discuss and screen the film for members of the U.S. military, as well as participate in a press briefing at the Pentagon. Butler certainly had *the* DC experience. We discussed his work with the U.S. military throughout the filming process, his own experience riding along on a working submarine, and of course I couldn’t let him go without doing a Sparta war cry.

First thing’s first, a friend (and alumni of Michigan State) told me that Butler came to his alma mater to do the Spartan war cry and it had become legendary at the school; Michigan State’s mascot is the Spartan. I hoped Butler would also remember this experience fondly, and let me tell you… I think it meant more to him than it probably did Michigan State! “It was legendary for me. I knew for years that they had been asking me to come and I happened to be shooting “Machine Gun Preacher” there and I went along. There were 77,000 people there. [The announcer said] ‘Ladies and gentlemen, he has finally arrived! From “300,” Gerard Butler… KING LEONIDAS!’ And they went crazy! I stepped up and said, “Guys, I’ve always wanted to do this, ‘SPARTANS! WHAT IS YOUR PROFESSION?’ 77,000 people went [Spartan chant].”

Not only did I have a next-level fangirl freakout when Butler reenacted the Spartan battle cry for me, but it was really awesome to see how much he appreciated his fanbase and acknowledged the magnitude and resonance “300: has had (and continues to have to this day). I told him I thought it was one of the first movies to really be meme-ified. Remember stuff like this?

He went on to talk about when they were filming the movie, he thought about the line of dialogue where David Wenham says “10,000 Spartans and 30,000 free Greeks” and had wondered what it would sound like to hear them chanting the haaaooooh battle cry. He never thought he would get to hear what it actually sounded like until the Michigan State game. “Suddenly, I am in Michigan State and 77,000 people are going ‘haaaaoooh.’ And by the way, they had the same energy as warriors. I have some of the crazy videos of my life from that day. I also directed the band and got the whole stadium to yell… It was one of the most memorable days of my life. I really had an amazing time. They were so cool there.”

When it comes to “Hunter-Killer,” I was honestly surprised to see how much the U.S. military participated in the filmmaking. Butler and director Donovan Marsh were able to spend time on a real U.S. submarine, experience life at sea, and most importantly for filmmaking, perform real life drills and exercises. “The military was always super helpful but very strict about staying within their budgets… not creating any missions for us or sending out nuclear subs just so we can film. I jumped on an established mission. We did drills, but they drilled all the time anyway. Some of their engineers spent time with our techs to really create the authentic feel of the sub when we were building the torpedo room and control room at the studio.”

t’s obvious that Butler and the rest of the crew have an enormous respect for the military and wanted to portray that on-screen. “A main focus of ours was to respect [the military] because that is what the movie is about. It’s about showing these incredible warriors in their work environment, doing what they do best, in the most hellish circumstances… where you get a chance to see their exceptional training, their expertise, their knowledge, but also their intellect and their intuition. Then going beyond that, their courage, valor, and steadfastness in the most unbelievably pressured situations. To show that integrity was a big thing for us.”

One of the most interesting things Butler said during the interview was in response to my question regarding whether there were any elements the U.S. military insisted on being in the film. “One of the main things they insisted on was women on board because that’s a new policy and that is very important. I loved how passionate they were about that. Even me going to the Pentagon yesterday and talking … my thought process was ‘They have been so good to us. Let me show their personnel and incredible soldiers… and show the risks and dangers and encourage people to have more awareness.’ I wanted to pay tribute and homage to the sailors who made that choice of life and career.”

Gerard Butler was an awesome interview and great sport. It was really cool to see how passionate he was about this project, and I think it reflects on-screen.

Our interview for ‘A Private War’ with Rosamund Pike, Matthew Heineman, Cat Colvin