Veterans and guests were invited to participate in a deer hunt on Dec. 8 through the partnership between Freedom Hunters and the hosts, the Central Hill Hunt Club.

On Dec. 8, the Central Hill Hunt Club on Pope Swamp Trail served as welcoming hosts to more than a dozen veterans for a deer hunt. Early that morning, the members and guests first met in the clubhouse for a hot breakfast in the clubhouse to get them going. Outside in trucks were hunting dogs eager for the hunt themselves. Their barks, whines and yelps could occasionally be heard inside. They were raring to go.

At one table back inside, Jaymz Cervantez said this hunt would be a first for him. He was invited by his dad, Martin, who retired from the Army earlier this year. Asked about his own chances for harvesting a deer, the father laughed and said, “Great, if it gets in front of me!”

Before the hunt began, two raffle prizes were awarded. Owen Raymer of Smithfield got a cooler, courtesy of the sponsorship of the Tucker Swamp Hunt Club. Gino Justiniani from Oceana Naval Base won a firearm, thanks to the generosity of Earl Sawyer of Sawyer Automative in Suffolk. That was especially helpful to the Navy-man since it was also his first time hunting. 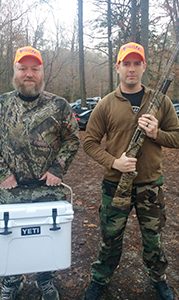 Owen Raymer of Smithfield, left, is a retired Navyman. He holds a cooler won in a raffle; the prize was sponsored by the Tucker Swamp Hunt Club. Next to him is Gino Justiniani from Oceana Naval Base. His gun — also a raffle prize — was courtesy of Sawyer Automotive. This hunt was a first for Justiniani.

Jack Arrington, club president, said this activity is the sixth one that he and fellow members have put on for veterans. This is done through the partnership with Freedom Hunters. Eastern U.S. coordinator Bud DePlatchett of Smithfield said the organization is a national non-profit that arranges for service members — male and female, active or retired — to enjoy such outdoor activities as hunting deer, pheasant or fish, and also occasionally sports. The families of fallen veterans and the children of deployed are also able to participate. Past recipients who saw what it means to be included in such activities have also stepped up to become volunteers. In this area, said DePlatchett, 42 volunteers are here in the Hampton Roads area.

“Everyone has a really good time,” said Arrington, adding that 30 percent of the veterans traveled from other places in Virginia, such as Chesapeake, Spotsylvania and Virginia Beach.

Central Hill was not alone in taking guests to a hunt. Windsor Hunt Club had been approached and also got interested. Those members plan on doing it again.

“I just wish every hunt club would join and take a few veterans,” said Arrington. “We’re trying to get more people involved in doing it and seeing how much enjoyment we get out of it.”

Just about all participants had a chance to harvest a deer, he said. As for the hunt itself, the two clubs and guests harvested a total of 13 deer. For example, one veteran who is a double-amputee got a buck that afternoon.

“This helps when we go to a manufacturer for support. One of first things they’ll ask about is our social media following. Benelli USA and Traditions Performance Firearms have been big supporters. Other hunt clubs or individuals interested in sponsoring or volunteering, we’d love to talk to them.

Love to talk to them. They can email me at bud@freedomhunters.org.”