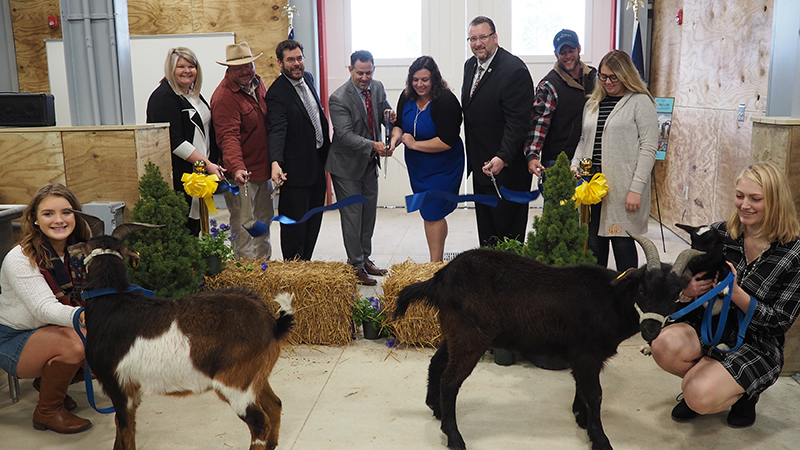 On Wednesday morning, during the first snow of the season, Isle of Wight County Schools celebrated the opening of its “million dollar barn” behind Windsor Elementary School with a ribbon-cutting ceremony.

Construction of the site, which includes the barn — complete with stables and a classroom building — began in April. The site was designed by RRMM Architects and built by BlueRidge General Inc., with construction costs initially estimated at $972,713. The new facility will serve as the home of the division’s agriculture career and technical education program.

Located behind the barn is a working farm, known as the school’s land lab, built from the ground up in by high school students enrolled in the program. They began work on the farm in September 2017, constructing chicken coops, fencing, water lines, goat sheds and rabbit cages.

“Last September, there was nothing but grass out here,” said Smithfield High School senior and agriculture student Gracie Owney, who was invited to speak at the ceremony.

Also invited were School Board Chairwoman Vicky Hulick and Isle of Wight County Board of Supervisors Vice Chairman William McCarty. Hulick called the realization of the new facility “a community effort,” while McCarty commended Superintendent Dr. Jim Thornton and the School Board.

“We are on the front lines of developing the workforce of tomorrow,” McCarty said.

Following the ceremony, attendees were invited to tour the division’s other CTE facilities, located at Windsor High School. This included the new outbuilding housing the school’s building trades program, which was completed this spring and used for classes for the first time in September.

In the building trades facility, students were in the process of constructing a tiny house. They have also painted sheds constructed by students who took the course last school year, and have constructed a hunting blind.

“My dad’s a carpenter,” said WHS freshman Jonathan Gurrin when asked why he chose to take building trades. “I’m going to learn some basic life skills so I don’t have to pay someone to fix things I can fix myself.”

In the school’s cosmetology classroom, WHS senior Logan Daughtry explained that next semester, she would be spending all four blocks of the school day in cosmetology in order to get the required instructional hours to take the Virginia state cosmetology test and receive her license. Adults, she said, need a minimum of 1,500 hours at a beauty school, but high school students only need 840. The state board is held in Richmond and is an all-day test.

As for how the time commitment would impact her academics, Daughtry said she already has all the credits she needs for graduation. After that, she plans to seek employment in a salon.

In Windsor’s manufacturing classroom, students had created a WHS-themed Monopoly board and several plaques using the room’s laser cutter, which prints pictures on wood. Students who complete the division’s manufacturing program will eventually earn their Manufacturing Technician Level 1 (MT1) certification.

In the school’s greenhouse, students were observing the tilapia Windsor recently acquired for its aquaponics setup. The feces of the fish is used to fertilize the plants growing in the greenhouse.

“I just like being outside,” said sophomore Averi Westheimer when asked why she chose to take the course. She added that while she wasn’t certain she wanted to pursue a career in horticulture, she would probably stay with the program next year.