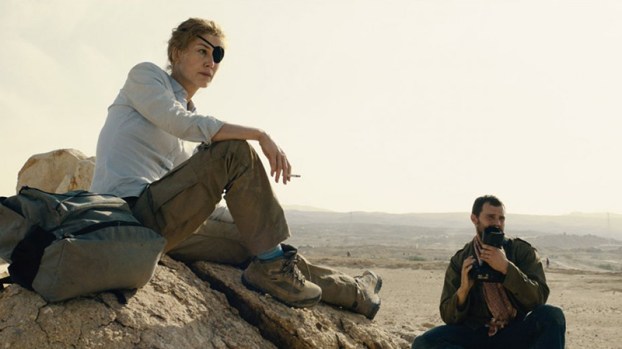 Our interview for ‘A Private War’ with Rosamund Pike, Matthew Heineman, Cat Colvin

Oscar-nominated documentarian Matthew Heineman (“Cartel Land”) knocks it out of the park with his first dramatic feature film, “A Private War.” I first saw this film at the Toronto International Film Festival (TIFF) and have been thinking about it consistently ever since.

Based on the life of Marie Colvin, an American journalist killed while reporting on the Syrian Civil War, this film is as powerful as it is important, especially at a time like this when attacks on the news media (and journalists in particular) are becoming more and more news stories themselves. I was honored to sit down with Heineman, Rosamund Pike (who plays Marie Colvin) and Cat Colvin (Marie’s actual sister) to talk to them about Marie’s life, the filmmaking process, and how real events made it into the movie.

Heineman used his guerilla-style filmmaking expertise to shoot many scenes in “A Private War” like a documentary, which added to the realism of every scene. Many key moments in the film were so realistic, it was hard to tell the difference between reality and movie magic. One scene in particular that interested me was how they were able to recreate scenes in bombed-out Homs, Syria, the site where Colvin was eventually killed. I wondered how Heineman was able to acquire such realistic footage since it would be almost impossible for a Hollywood film crew to film in Homs in present day and was amazed to hear how the scene was actually constructed.

“All of Homs took place in an abandoned construction site [in Jordan] that we dressed to look as much like Homs as possible. We didn’t have a big budget so we were only able to dress the bottom floor. We brought in a lot of rubble and all of the interiors we dressed to look like the media center, the hospital, the basement … the drone shot was a crane shot that went into a drone shot that tilts up to a field. We created a 2.5D environment where we populated a bunch of buildings and then we imprinted real photos from Homs. So, it is a CGI shot but it is actually real imagery. That shot took 2-1/2 months.”

The filmmakers also had the ability to talk to the real Paul Conroy (played in the film by Jamie Dornan), who was Colvin’s cameraman and a consistent presence on her dangerous journey. Conroy provided specific details about what he remembered from all of the locations Marie traveled through, from Iraq to Afghanistan to Syria.

Rosamund Pike explained, “Paul Conroy was with us when we were shooting and when he walked into the media center, (he used the term loosely) but the whole top of the building was shorn off as it was a bomb site. He was absolutely stunned … I think sometimes people don’t appreciate the level of detail the production designer goes into. [Conroy] was like the mattresses are the same, the blankets are the same… I think he was really taken aback by it and quite shaken by it.”

Pike’s performance as Colvin is a spectacular transformation that showcases the sacrifices, triumphs, and heartbreak many journalists on the frontlines — and behind the lines — face day in and out. I have been a long-time fan of Pike throughout her career, but her portrayal as Colvin is career-defining. She exquisitely portrays the tremendous toll war journalism played on Colvin, who was traumatized by the horrors she encountered around the world, to the point that she likely developed post traumatic stress disorder (PTSD,) which she sadly self-medicated with alcohol and medication.

Although Colvin was, at times, scared for her safety, she felt it was her duty and obligation to shine a light in the darkest place and make “suffering part of the record.” Pike explained how this role differs from her other films, “Marie was so vivid, every part of her, not just in her work and the words she wrote, but the person who walked in the room and stopped everyone in their tracks. She was unique. Everything about her was unique … her voice, her humor, her laugh, the way she walked … she cut a very unusual figure. It seemed the right thing to try to embody that totally, as much as you can. The whole thing is in a way an apology for [me] not being her and not being able to make a documentary about her.”

It was this spirit and individualism that shined through most in the story. Marie’s sister, Cat, described Marie’s tenacious, unrelenting presence from a young age.

“She would set her sights on whatever her goal was and there was nothing … she didn’t recognize barriers. She would find a way to make that happen. She never held back, it was always 150 percent for everything. I can’t even say she didn’t follow the rules. She didn’t even recognize there were rules to be followed.”

One of the most interesting elements of the movie for me was that despite filming in Jordan, Heineman used actual Syrian refugees as the background actors in the Homs scenes.

Pike explained, “They were Syrian people who had been in Homs. I think a lot of times, people aren’t anticipating perhaps the power of drama and what happens when you recreate it in a safe environment, a situation that is close to what you experienced. Emotion floods back and takes control of you. That is what you are asking your body to do when you’re an actor, but these people aren’t asking, they’re just reliving. Matt was playing all the time the blurring between truth and fiction. Obviously, we are telling a true story and there are elements of fiction or elements of extrapolation … as little as possible … some names were changed because we didn’t have the right to use their names. And obviously I’m not Marie. But, when you set the ground right, emotion that is true will flow. That is what I do as my job. That’s the idea. You never plan it, or I never plan anything. You just occupy the place that you’re supposed to be and see what happens. You can convince your body and mind that it is real and see where you’re taken. So with the Syrian [refugees], that was very powerful.”

Although it’s no surprise how “A Private War” ends, don’t let that stop you from seeing Marie Colvin’s story on the big screen. It is required viewing, not only to make you more aware of all of the people suffering in war-torn countries across the world, but to enable you to further appreciate everything journalists do and how much they sacrifice to bring these stories to light.

Consider this a small tribute to Marie’s legacy and all of the other journalists who have given their lives in the line of duty, and a larger show of support for the truth that only journalists and the news can portray.

Lauren Bradshaw I could tell you that Chris Pine goes full frontal, has a Scottish accent and mullet, sings and... read more