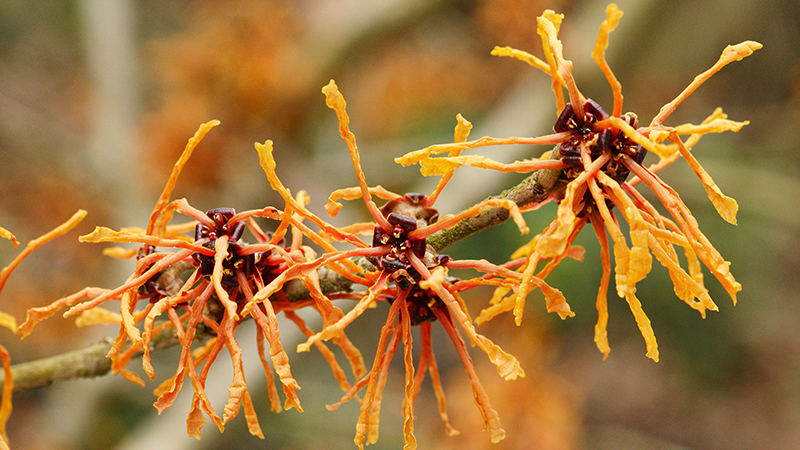 Not only does this deciduous shrub serve as a very late bloomer for a haunted landscape, but witch hazel also bears fruit while flowering as last season’s fruit takes a full year to ripen. Greenish seed capsules, turning woody and light brown with age, split open in autumn of the following year rocketing 1-2 black seeds up to 30’. Those seeds then take an additional year to germinate.

Early American settlers used the forked branches from the witch hazel plant for water divining like those of the European hazel used for dowsing. This historic practice for finding underground water sources is commonly called “witching a well.”

Even the leaves are rather ghoulish with large, wavy teeth edging every leaf margin and an upper surface appearance of dark green with lower surface a noticeably paler green. If you want this tallish shrub (reaching over 20’ in height) to be more tree-like rather than shrubby, promptly remove root suckers to prevent unwanted spreading into thick, unruly brush colonies.

Prune soon after flowering so as not to disturb next year’s buds from developing. Once new flower buds appear in full, the arching branches can be harvested and forced to bloom indoors just like those of forsythia and flowering quince.

Occurring in nature as an understory plant, its native Tidewater habitats include haunted forest margins and creepy creek banks. Best flowering appears when this plant has full morning sun conditions with dappled afternoon shade. This shrub thrives in a potion of moist, acidic, organically-rich soil. (For other trees and shrubs for acidic soils, e-search VCE publication 430-027.)

For unsuspecting trick-or-treaters lost in the woods at dusk, this bewitching shrub is an unexpected treat to behold as the forest’s other plants prepare for a long winter’s nap. Although capable of self-pollination, witch hazel is primarily pollinated by insects such as the nocturnal winter moths. These insects are active in cooler temperatures but held spellbound by the hazel’s yellow, fragrant flowers when little else is blooming. Grouse, bobwhite and turkey are known to seek out witch hazel seeds.

WTMG’s next Bring Gardening Home event for the autumnal season will be held today, Nov. 17, in the Carrollton Branch of the Blackwater Regional Library at 10 a.m. The topic will be “Non-Stop Gardening,” focusing on smart plant choices and four-season design.

VCE educational programs are open to all.