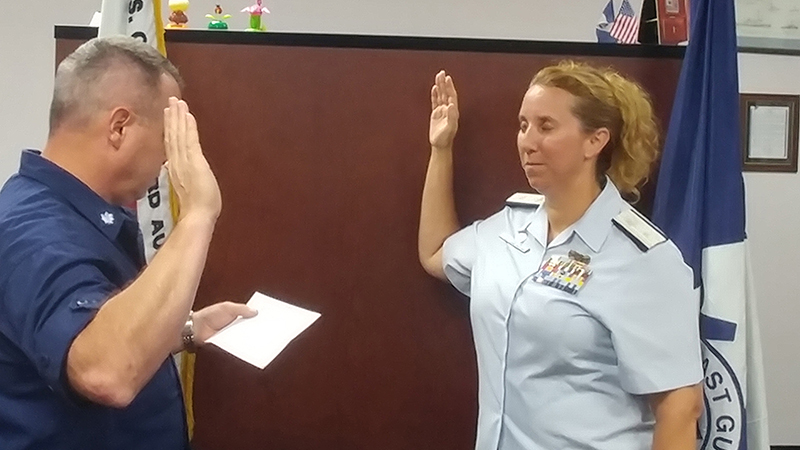 Commander Eric May, director of the Auxiliary for Coast Guard District 5 Southern Region, swears in Michelle Thornton of Smithfield as the district’s new district commodore.

On Wednesday, Oct. 3, Smithfield Flotilla 59’s Michelle Thornton was sworn in as the new district commodore for the U.S. Coast Guard Auxiliary’s District 5 Southern Region — a geographic area that includes Virginia, Maryland, the District of Columbia and North Carolina.

Commodore Thornton was elected to the position on Sept. 27 following a vote by the USCG Auxiliary D5SR board. The board consists of 15 division commanders representing units from each of the three states in the district; three district captains; current District Commodore Dave Adams; immediate past District Commodore Rob Sersen; Joe Safranek, president of the Past Commanders Association; Thornton, who had previously served as district chief of staff; and the active duty director of the Auxiliary (DIRAUX) for D5SR, Commander Eric May.

As commodore, the most senior position an auxiliarist can attain at the district level, Thornton will have overall responsibility for the operations of the 15 divisions and 79 individual flotillas in the 98,079 square miles that comprise D5SR. She will also be tasked with filling any vacancies in the district’s 21 staff officer positions, presiding over all district board and executive committee meetings, and representing the Auxiliary to Cdr. May and the rest of the active duty Coast Guard.

“Coast Guard Auxiliary Flotilla 59 of Smithfield is proud and honored to announce the election of one of its members, Michelle M. Thornton, to the office of District Commodore,” said Fred Hetzel, 59’s flotilla commander. “In Flotilla 59, we still see the District Commodore as one of us, and even though we might not see her as often as in the past, she will know we support her and will assist her any way we can as she leads the over 2,300 auxiliarists in the Mid-Atlantic region.

“Two years ago, Flotilla 59 was named the National Flotilla of the Year, and now, with the new district commodore coming from our ranks, it’s obvious that Smithfield, VA is someplace special. For a town of less than 9,000 residents to support and produce this level of accomplishment in an all-volunteer organization of less than 25 members is truly inspiring. Thank you, Smithfield, for your continuing support of our activities and for helping us help you stay safe on the water.”

According to former district commodore Rob Sersen, Thornton is the second woman to be elected district commodore in D5SR’s history. The first was Patricia C. Roberts in 2000. Thornton’s election was, however, a first for the district in that it was conducted using an online voting program. The regular face-to-face meeting of the board had been cancelled due to Hurricane Florence.