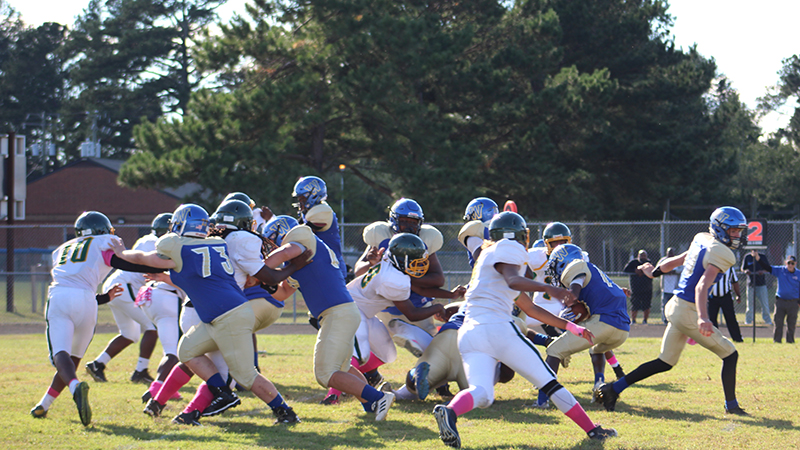 Spirits were understandably high on Saturday afternoon when the Windsor High School football team came to the field for the Homecoming game against Greensville High School’s players. The Dukes won on Oct. 5, so why shouldn’t lightning strike twice? That was not to be though. The Dukes lost to the Eagles, 54-12.

Within the first 30 seconds of play in the first quarter, the visitors Hareese Arrington ran 21 yards for touchdown, but the conversion pass failed. A little over a minute and a half later, the Eagles’ Arrington dashed 41 yards for their next touchdown, followed by a third at 7:52 on the clock. Both conversions, each by Isaiah Seaborn, were good, putting the visitors at 22-0.

A little more than a minute later, Daequan Garris of Windsor ran an 21 yards for the team’s first goal, much to the excitement of the fans The conversion run, however, failed.

Two minutes later, the Eagles’ Seaborn got a two-yard run touchdown, followed by Arrington’s run for the conversion. That put the score at 30-6, visitors’ favor.

For the second quarter, the hosts were kept scoreless, but they also largely prevented the guests from any more points until 6:35 on the clock. That’s when Eagles’ Kemory Sykes got an eight-yard run. The conversion pass went from Seaborn to Jaeden Jordan, putting the score at 38-6.

Returning from halftime, the two teams again kept each other from scoring in the third until 1:23 was left on the clock. Then, Seaborn got the next six points on a two-yard run, as well as his run for the conversion.

In the fourth quarter, the Dukes and Eagles went back and forth on the field, preventing touchdowns. At Around 7 minutes left on the clock, the hosts finally achieved their second and last touchdown from Garris’ six-yard run; the conversion failed. Approximately at minute later, the Eagles’ Jordan got the team’s last goal, a four-yard run for a touch down, and Seaborn successfully ran for the conversion.

Windsor had two punts for a 31-yard average; Greensville had one punt for 15 yards.

Both teams each had one fumble lost.

Windsor travels to Southampton High School for its homecoming on Friday, Oct. 19, at 7 p.m.