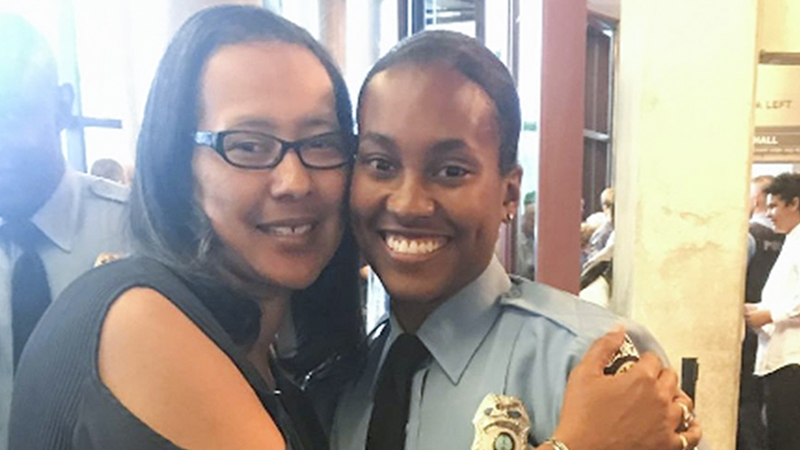 LeAndra Watford recently began her duties as a police officer in Prince William County. At her graduation from the criminal justice academy in June, her mother, Kisha Watford, gives her a congratulatory hug.

Ever since elementary school, LeAndra Watford has had an affinity for putting puzzles together, but not in the way that you may think.

“I participated in the Summer Regional Governor’s School Program for several years, and always chose forensics or crime solving as topics,” the 24-year-old recalled. “I have also always been interested in television crime shows like “CSI,” “Law & Order” and “Criminal Minds.””

The Southampton County native is realizing the fruition of her aspirations, as she was one of two females out of a class of 22 who graduated from the Prince William County Criminal Justice Academy in June. She has been assigned to work patrol in the eastern part of the county.

After graduating from Southampton High School in 2011, Watford enrolled at Virginia State University in Petersburg where she planned to major in criminal justice.

“I lost focus while there,” she said. “I returned home to complete my studies at Paul D. Camp Community College, and loved it.” An honor student, Watford was inducted into the Omega Zeta Chapter of the Phi Theta Kappa Honor Society. Although she completed her associate’s degree in administration of justice — police science in August 2014, she marched at the official commencement ceremony in May 2015.

“Everyone who I dealt with at PDCCC was instrumental in helping me succeed. They listened and were very supportive of what I wanted to do,” Watford said.

Following graduation, Watford enlisted in the Army National Guard while awaiting job prospects. “That involved five months of basic training and Advanced Individual Training (AIT),” she said. Watford later was accepted to the law enforcement academy, which entailed six months of instruction that included practical and field training, and classwork.

“It was an exciting experience to see all of my hard work pay off and to have my family at my graduation,” she said. “The highlight was having my little brother pin my badge on me.”

Although tensions and mistrust of law enforcement officials have mounted in recent years, Watford remains undaunted about that becoming a concern when it comes to doing her job.

“The profession is all about respect,” she said, “respect for self and for others.”

As a matter of fact, she plans to heighten her career by attaining a bachelor’s degree.

“My career goals include joining the SWAT team within my current department,” Watford said. “Then I would love to possibly go to a federal agency, like the Bureau of Alcohol, Tobacco and Firearms (ATF) or the Drug Enforcement Administration (DEA.)”

According to Watford, if she had college to do over, she would have started her path in higher education at PDCCC in order to save her parents money and perhaps enable her to start working sooner.

“Although a college education is not required to become a police officer, my associate’s degree from PDCCC helped familiarize me with class work, as well as improved my place on the pay scale.”

She noted, “Throughout my educational journey, I have learned more about myself and what I am capable of accomplishing. You must believe in yourself and follow your dreams.

“I have learned that when others don’t give you a chance, that it is their loss, and also that everything happens for a reason. You should seize the opportunity to be an asset to others.”

For more information about the Administration of Justice program at PDCCC, contact lead faculty Joe DeStefano, jdestefano@pdc.edu or 925-6330. Those interested may also visit www.pdc.edu.

WENDY HARRISON is the public relations specialist for Paul D. Camp Community College. She can be reached at wharrison@pdc.edu.