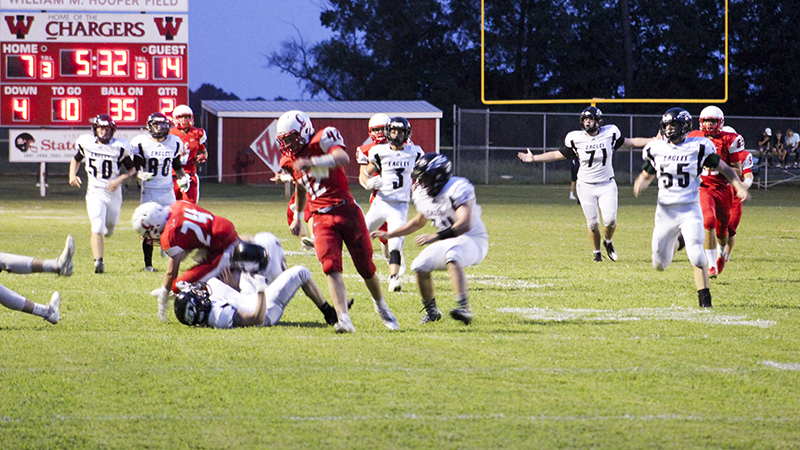 The Isle of Wight Academy Chargers put a stop to an Eagle from Fredericksburg Christian School on Friday at the William M. Hooper Field in Isle of Wight.

The Chargers were led by Hunter Edwards’ 95 rushing yards.

The Eagles passing game doomed IWA, 21-7, when the two teams met a year ago. Nearly even in total offense (Fredericksburg had 266 yards; IWA, 244), Fredericksburg passed for 200 yards and IWA rushed for 197, but the Eagles’ big-play offense made the difference. The win over IWA anchored a 5-0 start for the Eagles, though they won only one of their last four.

Friday’s tilt was Fredericksburg’s third consecutive road game to open the season; they previously had defeated Portsmouth Christian and Fuqua. They made it clear that they weren’t lagging from the trip form Northern Virginia, rumbling 80 yards 10 plays — all runs — to open the scoring with a 2-yard run by Zylonis.

IWA’s first possession was cut short by an intentional grounding penalty on quarterback Ryan Boyce. His team netted only two yards before being forced to punt.

Aided by a face mask penalty on Isle of Wight, the Eagles finished up first-quarter action by advancing to the home team’s 9-yard line, where Zylonis fumbled 9 yards from the goal line. The Chargers recovered and used long runs by Boyce and Edwards on their next drive and capped that offensive with a 19-yard pass from Boyce to Odin Bristol. The PAT tied the score at 7 with 10:34 left before halftime.

The tie didn’t last long, however. Fredericksburg’s Antwan Johnson gathered in short kickoff at his own 15 and weaved through the middle of the field, all the way back for an 85-yard return and the touchdown.

The two teams exchanged punts and IWA got the ball back and used a 59-yard punt return by Colby Williams to set up shop at the Fredericksburg 16. Four plays later, Boyce leaned across the goal line. Tre Powell’s PAT tied the game at 14.

Isle of Wight tried to prevent the Eagles from scoring before the half. Boyce tackled an Eagle ballcarrier for a loss on third-and-goal from the IWA 2-yard line. But Cameron Schaub ran it in for a touchdown with :12 left before the break. The PAT made the score 21-14.

Fredericksburg took its first possession of the third quarter and marched 49 yards in five plays, finishing off the drive with a 20-yard run by Hunter Whittenburg with 7:02 left in the third.

Another Williams return set the Chargers up near midfield on the ensuing kickoff. A long pass to Edwards and a first-down run, also by the senior running back, set up a 14-yard scoring strike from Boyce to junior Zack Stroud to round out the scoring.

IWA was scheduled to host local rival Nansemond-Suffolk Academy on Friday, but Hurricane Florence has compelled the closing of the school beginning on Wednesday and until further notice.

NSA defeated IWA last year after being down by 20 points in the third quarter. Prior to that, the two teams hadn’t met in the regular season since the mid-1990’s.