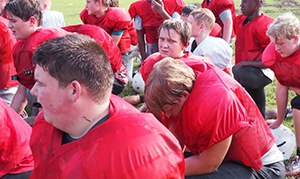 Isle of Wight Academy Chargers take a break from practice before their season began. That hard work already paid off last Friday when the team won 27-0 over Atlantic Shores.

Hunter Edwards scored two touchdowns and rushed for 140 yards as Isle of Wight Academy raced to a 27-0 win over rival Atlantic Shores Christian on Friday at William Hooper Field.

The Chargers’ leading rusher was their only player to carry the ball more than 10 times; two teammates — fellow running back Cameron Riblet and quarterback Ryan Boyce — each rushed eight times. Riblet finished with 31 yards on the ground; Boyce, with 52, including a rushing touchdown. IWA also outrushed Shores 267-57.

Boyce completed six passes on 11 attempts for 87 yards. He also found receiver Odin Bristol with a scoring pass in the fourth quarter to close out the game.

The IWA defense was equal to the Seahawks’ test, holding Shores to 57 rushing yards and 131 yards of total offense. Riblet keyed the Charger attack along with Bristol. Eight other IWA defenders had at least one tackle.

Isle of Wight opened its first possession of the game on its own 37-yard line and methodically moved down the field, only rushing once for more than 10 yards. That was until Edwards’ 19-yard scoring jaunt to make it 6-0 Chargers.

Later in the quarter, 10-yard runs by Josh Savage and Edwards prompted an 89-yard-long IWA drive. Edwards again finished it off with an 11-yard run to make it 13-0

IWA lost possession on downs two times in the second quarter, but righted the ship with an eight-play, 66-yard drive. This time, Boyce called his own number, dashing in from five yards out to make the score 20-0.

IWA kicker Tre Powell was 3-or-4 on PAT’s on the night.

“I am very proud of the effort our team showed this past Friday night,” said Head Coach Dale Chapman. “Offensively, we put up good rushing yards and defensively we help a usually big offense to a no score. Ryan Boyce, our quarterback, took charge of our offense, with Hunter Edwards being our leading rusher with 24 carries for over 100 yards. Cameron Riblet lead our defense with over 20 tackles. Our young guys on special teams held their own and I am so proud of our team starting out with a win.”

The Chargers (1-0) renewed their rivalry with Portsmouth Christian (0-1) on Friday night when they visit the Patriots. Results were not available by presstime. On Friday, Sept. 7, IWA will host Fredericksburg Christian School at 7 p.m.

WINDSOR Windsor High School Dukes got a strong start for their first football game of the season, winning 33-12 over... read more