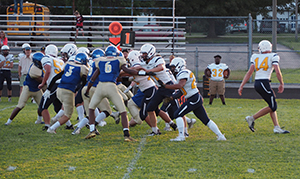 The Dukes and Ponies struggle for possession of the ball.

Windsor High School Dukes got a strong start for their first football game of the season, winning 33-12 over the Chincoteague Fighting Ponies on Aug. 24 at Windsor.

Afterward, Dukes Coach Tyler Mosley said of his team, “The kids, they played hard. They executed better and cut down on mistakes.”

He acknowledged that it’s their first victory in about three years.

The Windsor High team traveled to Nandua High School on Thursday, Aug. 30, and then have a Bye week for Sept. 7.

ISLE OF WIGHT On a humid, 93-degree day in August, sweat can be seen dripping from the brows of Isle... read more