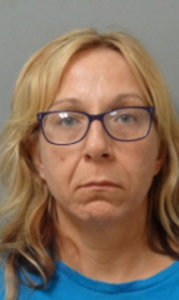 Jennifer M. Bumgardner, the town clerk of Ivor, was arrested last week on three felony warrants, each for embezzling $200 or more, according to an arrest report provided on Tuesday morning by Lt. Camden Cobb, a spokesman for the Southampton County Sheriff’s Office.

Bumgardner, 43, of Seacock Chapel Road, Zuni, was booked on Aug. 16, and released on bond that same day.

Cobb stated in a press release later on Tuesday afternoon that investigators met with Ivor Mayor Tara Kea in July in reference to some discrepancies she found in the town’s accounts.

“An investigation was conducted by the Southampton Sheriff’s Office into any possible criminal activity, which resulted in the embezzlement charges against Bumgardner, who was employed as the Town of Ivor Clerk at that time,” he said. “A search warrant was also executed at Bumgardner’s residence on the day of her arrest and deputies seized multiple documents and other items as evidence in this case. The search warrant was executed without incident.”

Cobb added in his statement that no other employee or official of the Town of Ivor is under investigation or considered a suspect.

He also said the investigation is ongoing, and the total dollar amount for the stolen funds is not yet available. More charges are expected as the investigation continues. Cobb said by phone that he’ll be going as far back as Bumgardner has been employed by the Town of Ivor. So far he has reviewed documents as far back as 2016, and will go further.

“The sheriff’s office would like to thank the Town of Ivor’s elected officials for their full cooperation and discretion during this investigation,” said Cobb.

Called for comment, Kea said, “I can’t say very much of anything other than the town is fully cooperating with the Southampton County Sheriff’s office. I am working closely with my council to sort this all out. Because it’s an ongoing investigation I can’t really comment further.”

Asked to confirm when Bumgardner had started work as the town clerk, Kea did say she found a letter that Bumgardner had been offered employment in March 2013. This was while Sandy Vick was mayor.

Vick, when asked for comment, said, “I’m aware of the matter, and there’s nothing that I can say at this time. The town is cooperating completely.”

Bumgardner is scheduled to appear in Southampton General District Court on Friday, Aug. 24, at 9 a.m. for an arraignment.

ISLE OF WIGHT Two people accused of manufacturing methamphetamines and conspiring to distribute them were arrested on Monday, the same... read more