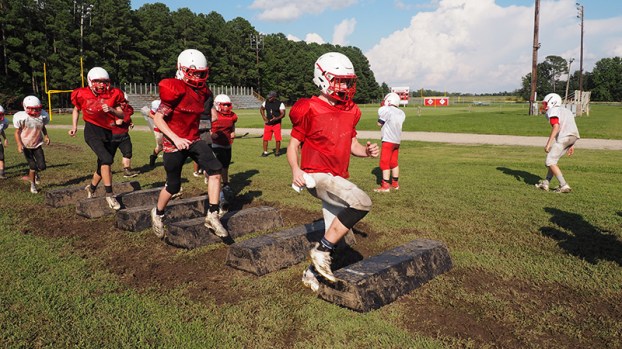 Isle of Wight Academy Chargers go through their paces during training for the upcoming season.

On a humid, 93-degree day in August, sweat can be seen dripping from the brows of Isle of Wight Academy students hoping to become or return as members of the school’s varsity and junior varsity football teams. Socks and shoes that had once been white are now caked with mud.

“It’s too hot for anyone else, but not for us!” a student team captain shouts at the less experienced athletes on the team, attempting to motivate them.

As with previous seasons, Head Football Coach Dale Chapman’s goal for the Charger’s this coming school year is for its varsity team to make it to the playoffs. His goal for the JV team is to be undefeated.

“I think we have a good team of seniors and captains — a veteran team,” Chapman said of varsity.

He added that the team has veteran players on both offense and defense, and that as long as everyone stays healthy and uninjured throughout the season, the team should have a good shot at making the playoffs.

Attendees at IWA football games may also see some new faces on the team. This school year, the team has three new varsity players and seven new JV players. IWA’s varsity and JV players train alongside each other during practice.

“They [JV players] do the same drills and all the things we expect of our varsity players,” he said.

Last season, IWA finished with a record of 3-6, which Chapman said was due to some key players sustaining injuries.

“In Game 4 we lost our starting quarterback and had to start a ninth grader,” he said.