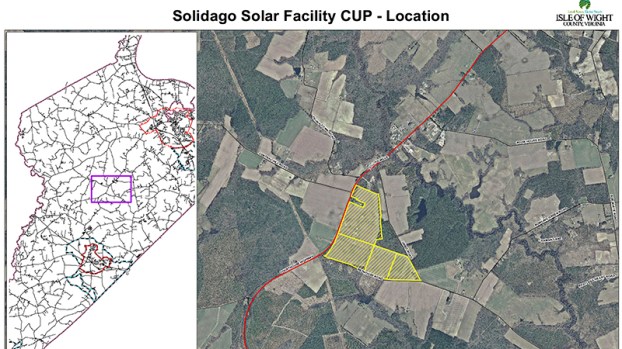 The Solidago Solar Facility will be located on four parcels in Isle of Wight County less than one mile south of the county courthouse and administrative complex.

A Seattle, Washington-based developer of community and utility-scale solar energy projects plans to establish a solar farm in Isle of Wight County.

On Thursday, the the county’s Board of Supervisors voted 4-0 with one absent to approve a conditional use permit application by OneEnergy Renewables for a 20 megawatt solar photovoltaic generation facility on portions of four parcels totaling approximately 193 acres. The vote was taken following a public hearing on the matter.

The land is located less than one mile south of the county courthouse and administrative complex. According to documentation provided by Kimley-Horn, the architectural firm OneEnergy has retained for the project, the Solidago Solar Facility, as it will be officially known, will produce enough electricity to power 5,000 homes. The power will be fed directly into Dominion Energy’s grid.

Marni Carroll, a representative of OneEnergy, explained that there would be no permanent facilities constructed and that the company would remove the solar equipment at the end of its 25- to 35-year lifespan. She said that the project should not have any adverse effects on property values, as solar power does not create noise, smell, emissions, traffic or dust and requires no water or sewer.

Only two people spoke during the hearing. Sabrina Wilcroft, who resides on Red House Road — one of the streets that will border the solar farm — expressed concerns about the type of fencing the company would use around the property. She said she did not want the facility to look like a prison with chain link fencing and barbed wire.

Thomas Uzzle, the other speaker, said that he felt whatever type of fence and landscaping the company planned to use to shield the view of the facility from Courthouse Highway (U.S. Route 258) should be extended around all three sides of the roughly triangular-shaped site.

As far as the presence of the facility itself, Uzzle said, “I’ve got no problem with it; I’d rather have that than a housing project of some kind.”

The Solidago Solar Facility is named for the solidago native flowering plant, better known as goldenrod. This will be planted in the fields surrounding the solar farm to benefit bees and other pollinating species.

In other business, the supervisors approved agreements with the Isle of Wight and Mill Swamp hunt clubs to re-lease the Blackwater property, located off of Broadwater Road. The Isle of Wight Hunt Club will have use of the southern tract and the Mill Swamp Hunt Club will have use of the northern tract through June 30, 2019, both at the same rates they paid for the leases that expired in 2017.

Once the current lease expires, the supervisors plan to make a decision on the future use of the property based on the recommendations of a task force headed by David Smith, the county’s director of Parks and Recreation.

Prior to voting on the lease agreements, the supervisors held a public hearing. Only two people spoke at the hearing, both of whom were representatives from the respective hunt clubs. Each advocated for re-leasing the property.