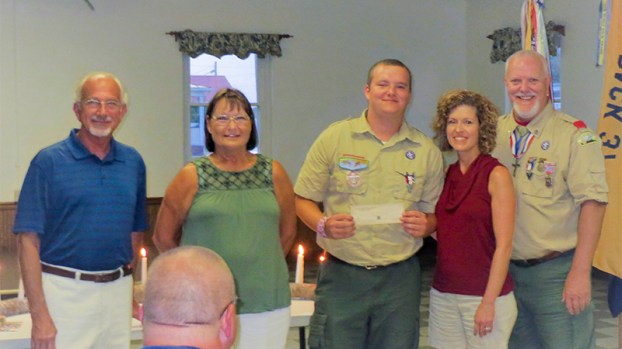 Recipient is a member of Carrsville Troop 37

The fourth annual Eric V. Henderson Memorial Scholarship was presented to Grant Hasty of Carrsville Troop 37 on Tuesday during the Court of Honors Ceremony at the Carrsville Community Center.

Eric Henderson was an Eagle Scout with the now disbanded Troop 28 of Franklin. He continued with his love of scouting through his mentorship with Campus Scouts while attending Virginia Tech. He passed away in January of 2014. It was this love of scouting that prompted the family to start the scholarship that fall by offering a $1,000 award to a local Boy Scout. The recipient must be in good standing of the troop with acceptance into a full-time college and hold a minimum GPA of 3.0. He must demonstrate leadership, character, and heart for family, friends and community by exemplifying the Scout Oath and Law in his daily life as well as to assist others and conduct himself in such a way that warranty similar recognition.

Hasty was unanimously selected by the committee. He is the son of Judith and Frankie Hasty of Carrsville, and is an Eagle Scout with Troop 37 chartered by the Carrsville Ruritan Club. He graduated from Windsor High School and will attend PDCCC for the fall term with a major in science.

Hasty has countless hours volunteering for the Carrsville Volunteer Fire Department, Isle of Wight Task Force, Mt. Carmel Christian Church Food Bank, Community Hunt Club, and is an active member of Colosse Baptist Church. He served as instructor, patrol leader and quartermaster in his Boy Scout troop and earned the rank of Eagle Scout while mentoring fellow scouts in their quest to earn merit badges such as fishing, fly fishing, pioneering, orienting and fire safety.

Assistant Scoutmaster Gregory South said, “Grant is an exceptional young man who willingly gives of himself to others.”