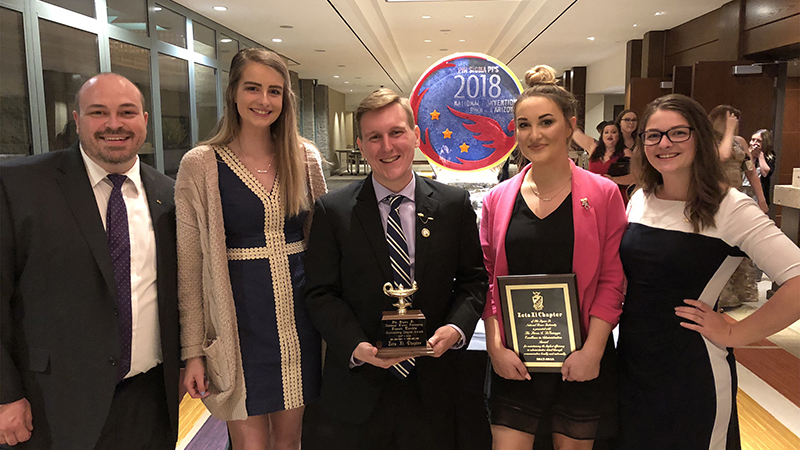 Shyanne Jackson Spivey, who graduated from Windsor High School in 2015, attends Coastal Carolina University and majors in business management and marketing. She is also a member of the Zeta Xi Chapter of Phi Sigma Pi National Honor Fraternity at CCU. On July 28, the chapter was recognized at the fraternity’s 2018 National Convention. The gathering took place July 25-29 in Phoenix, Arizona. Brothers Alexa Bode, Reagan Bond and Spivey traveled to Arizona along with alumnus brother Wyatt Davies.

Spivey was named to the dean’s list at CCU for having earned a 3.5 GPA or higher this past spring. She is a daughter of Ed and Donna Spivey of Franklin.

During the awards banquet, the Zeta Xi Chapter was awarded the Joseph Torchia Outstanding Chapter Award for all of the improvements and achievements the Chapter has made this past year. A few of those achievements include participating in more hands-on activities such as the Polar Plunge benefitting the Special Olympics of South Carolina, building homes with Habitat for Humanity of Horry County, participating in Joy Prom, raising more than $2,400 for Relay For Life, sending 10 people to the Fraternity’s regional Leadership Academy at North Carolina State University, and facilitating nine Leadership in Action modules.

The chapter was also awarded the Steven A. DiGuiseppe Excellence in Administration Award for excellence in communication nationally and locally.

Shannon Stewart, senior lecturer of English at CCU, was also nominated for Adviser of the Year for her work as the faculty adviser to the chapter.

At the convention, all chapters of Phi Sigma Pi gather for Grand Chapter, a keynote speaker, Leadership in Action educational modules, an awards banquet, and to foster inter-chapter relationships.

Phi Sigma Pi is a national, gender-inclusive honor fraternity based out of Lancaster, Pennsylvania. It was founded in 1916 at Central Missouri State University and has over 4,000 active undergraduate members at over 100 universities across the country today.

Phi Sigma Pi is built upon a tripod of scholarship, leadership and fellowship. The National Honor Fraternity is committed to improving humanity through those ideals.