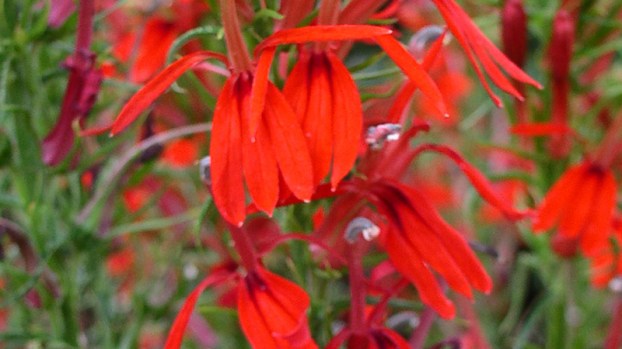 The blossom of the Cardinal Flower is unusual among our native wildflowers, producing a true red color. The flowers are sources of nectar to butterflies and attract hummingbirds, which are the principal pollinators.

Cardinal Flower is source of nectar

One of the most spectacular and beloved of all our wildflower species, Cardinal Flower was named for its resemblance to the intense red worn by cardinals of the Catholic Church. Each flower is about one and a half inches long, with the lower lip of each flower divided into three spreading lobes while the upper lip is two-lobed. Between the two lobes a tube forms with grayish dots that are actually the reproductive parts of the flower. The male part emerges first, followed by the female, on the same stalk.

Cardinal Flower needs moist rich soil. While it will tolerate average garden soil and moderate moisture, it loves to have its roots bathed in the wet, and will grow taller with optimum conditions. However, only one bloom will develop per stalk, so they should be clustered together. In rich soil with lots of water, as many as 50 flowers will bloom on each stalk. Planted with a continual source of water, such as a little stream in the garden, and plenty of mulched organic material, cardinal flower will bloom from midsummer to frost.

The blossom is unusual among our native wildflowers, producing a true red color. The flowers are sources of nectar to butterflies and attract hummingbirds, which are the principal pollinators. Although neat gardeners like to remove the spent stalks, it’s better to leave at least one to set seed and self-sow. Then in the fall or early spring, the seedlings can be transplanted to new sites.

A relative, the Great Blue Lobelia (Lobelia siphilitica,) is an even bigger favorite of the hummingbirds; it grows where conditions are a little drier. Red Cardinal Flower can be planted at a pond’s edge, while Great Blue Lobelia thrives a little distance from the edge of a pond. Both species grow naturally throughout Virginia.

The brilliant red flower was one of the first plants sent back to France by the French colonists. American Indians made a tea of the roots to use for stomachaches, syphilis, typhoid, worms and as a love potion.

But be careful — the plant can be deadly! It contains at least 14 alkaloids similar to those found in nicotine, and can cause vomiting, sweating, pain and death.

Kristi Hendricks You name it, and it’s sure to be vigorously invading my lawn. The summer annual weed grasses seem... read more