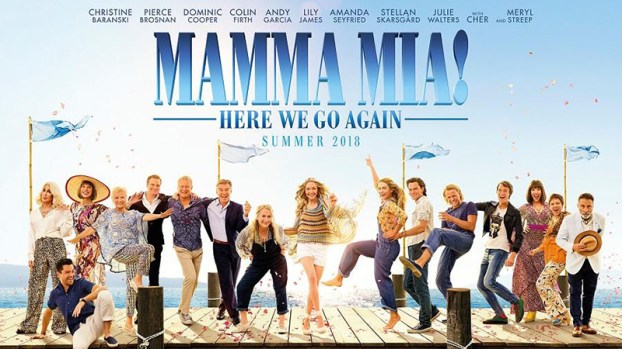 “Mamma Mia: Here We Go Again” is one word: delightful. It is fun, ridiculous, heartwarming, lighthearted and everything we need right now. Set five years after “Mamma Mia,” this sequel shifts back and forth between the past and the present. In present day, Sophie (Amanda Seyfried) is throwing a huge party to celebrate the reopening of her hotel villa on the Greek island of Kalokairi that honors her late mother Donna (Meryl Streep) and provides the perfect excuse for a cast reunion. But things get hairy when a storm throws everything off track and Sophie starts doubting whether they can actually pull off the celebration. Interspersed flashbacks focus on 21-year-old Donna’s (Lily James) journey to the island and shows how she met all of the men that could be Sophie’s father.

It’s hard to criticize a movie that has this much joy and gives zero f-s what you think … so I am not going to. Instead I am going to do a rundown of all of my favorite parts of the movie … and try not to make every point about Cher, Cher’s wig, or MERYL STREEP.

Supporting Cast: First and foremost, I want to highlight the supporting cast, which is easily the best part of the movie (and the funniest.) The casting for the younger actors was SPOT ON, especially in finding a young Christine Baranski. Both the young and more mature versions of the characters Tanya (Christine Baranski and Jessica Keenan Wynn) and Rosie (Julie Walters and Alexa Davies) stole every scene they were in and had my favorite moments in the film. Harry (Colin Firth and Hugh Skinner) was also a standout. It’s amazing how much Skinner was able to embody Firth’s adorkable awkwardness.

Embraces the Cheese: If you thought the first “Mamma Mia” was cheesy, buckle up! “Here We Go Again” doesn’t care what you think and doubles-down on the elements that made the first film so fun and charming. It gives audiences exactly what you came for, so leave your attitude and eye rolls at home.

Dance Numbers: Of course the dance numbers and songs are one of the main reasons you go to see musicals. And what I especially noted in “Here We Go Again” was that the dance number for “Waterloo” prominently featured a disabled dancer, who rocked out and took the scene to the next level. How awesome is that! I hope more movies and television shows take note.

Singing: Many of the songs in “Here We Go Again” are Abba’s B-sides, and although they aren’t as catchy as the hits used in the first film, they were still utilized perfectly to move the story along. My “new” favorite was “Knowing Me Knowing You.” But don’t worry, there are still some classics like “Mamma Mia,” “Dancing Queen,” “The Name of the Game, and “Super Trouper” sprinkled in at all the right times.

Cher’s Wig: Cher looks incredible at 72 years old, I don’t know what she has had done, but you better believe I will be the first in line when I am her age. I loved that director Ol Parker played to the audience and shot every scene with her in an over-the-top, diva fashion. We all know Cher is known for her dramatic wigs, and she did not let up for “Mamma Mia.” I just want to know where this wig was for Kate Mara in “Fantastic Four”?

7 Glorious Minutes of Meryl: Hey, I’ll take what I can get when it comes to Meryl Streep, and since her character is technically dead in this film, we only get about seven minutes with her. And of course HRH Streep crushes it. I never thought I would say I cried in a “Mamma Mia.” movie, but her duet with Amanda Seyfried is so touching it left me teary! Don’t judge me until you see it; I saw a few other misty eyes too. But take heart, after the sadness, we quickly transition into a hilarious song and dance number to “Super Trouper” that plays over the end credits.

Limited Pierce Brosnan Singing: I saved the best for last. As if this couldn’t get any better, Pierce Brosnan only sings for ~1.5 minutes!!! Someone in my theater literally said “Noooo!” when he started singing … wait for it … a capella, but we were all thankful that it quickly ended. In other good news, his young counterpart is not as bad a singer and that is one continuity error I will NOT complain about.

Imagine for a moment that you couldn’t see hardly anything except blurry shapes and blobs. What would you miss out... read more