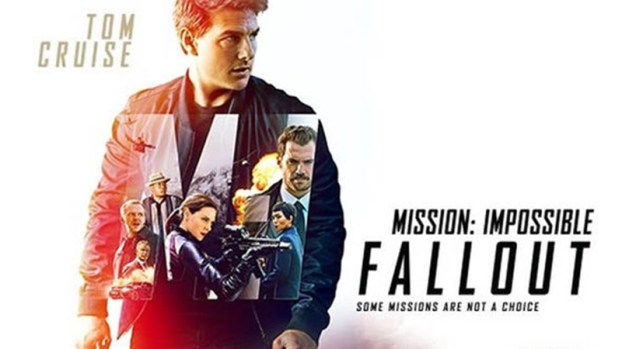 I can’t begin to say how excited I was when I found out I would get to interview Rebecca Ferguson for “Mission: Impossible – Fallout.” I have been a huge fan of hers since “The White Queen” and my fandom grew even more after “Mission: Impossible – Rogue Nation.” With follow-on hits like “The Greatest Showman,” “The Girl On The Train” and “Life,” Rebecca is proving herself to be a chameleon, able to adapt to roles across all genres and a go-to talent with serious staying power.

But what you’ll probably be most excited to hear is she is incredibly down-to-earth and an admitted fangirl like me. When we weren’t talking about her Mission Impossible character, Ilsa, we were geeking out about how many times we have seen “Titanic,” the fact we are still waiting on our letters to Hogwarts, the genius of Helena Bonham Carter and the insanity of comic conventions. Having just had a baby eight weeks ago, Rebecca also spoke about how wonderful it is to be able to show her children Harry Potter and experience the books and movies through their eyes.

“If I could go to Hogwarts I would have,” she said. “Do you know what I’m excited about? There’s a reason to having babies, and that reason is so you can read the Harry Potter books to them and watch the movies through their eyes. Then you have another one and do it over again. I’m a little bit of a nerd.”

Here’s to hoping Rebecca will get a role in an upcoming “Fantastic Beasts” movie or maybe as Hermione in Harry Potter on Broadway! You better believe I’ll be first in line.

Circling back to Mission: Impossible, there is no doubt in my mind that Rebecca’s character, Ilsa Faust, is one of the best action movie characters of the last two decades (in my opinion of all time) and believe me when I say, she again hits it out of the park for “Fallout.” It is her utterly cool, interesting, bada** performance that consistently pulls focus and — if I can say so myself — at times overshadows the megawatt star, Tom Cruise… especially when she is constantly saving his life. Paramount must be breathing a sigh of relief that Rebecca’s Ilsa is standing by to take the reins of the franchise in case Cruise’s Ethan Hunt decides to call it quits … or if they want to really double down and set a spinoff series around Ilsa. :prayer hands:

During our interview, I wanted to focus on my favorite aspect of Ilsa, the fact that she is able to exist as Ethan’s equal. Ilsa rides motorcycles, fights baddies, and shoots guns just as good as Ethan (if not better) … and did I mention most of the time it is all done in heels? Of course there is a bit of romantic tension between the characters, but a lot of that is centered around a mutual admiration and respect for one another. For the most part, Ilsa’s gender is secondary to the fact that she is a awesome agent.

Rebecca agreed, “We stress the fact she is a bloody good agent. I’m not playing on the gender. I don’t think about the fact that I have boobs and some people don’t have boobs. It just creates something… a regular person who has a drive and vulnerability and strength. They do equally with Ethan’s character. Especially in [“Fallout,”] it’s darker and rawer somehow and I wonder if it’s because we start to question the good and evil in ourselves.”

I also pointed out that I love the way Ilsa always makes a grand entrance … whether it’s gliding up a staircase in the Vienna opera house, or showing up in the nick of time to save Ethan (and the world.) According to Rebecca, this is actually a conscious choice during filming.

“Actually, it’s funny. I remember Chris [McQuarrie] and Tom [Cruise] talking and it was so important for them that she had a cool entrance all the time. And I hadn’t really seen it until after when they said, ‘Have you thought about your entrance?’ I thought, ‘Oh my God yes, when I saved your butt. Remember that one? Then I’m going up the stairs … yes!’ It’s really such an homage to her character.”

So what’s next for Rebecca after “Fallout”? I pointed out that she has been in basically every genre of film, from thrillers, to period dramas, to science fiction and a musical. Is there a genre she would like to focus on next? Following the success and fun filmmaking process of “The Greatest Showman,” she said she would be down for another musical. But first up is Joe Cornish’s “The Kid Who Would Be King,” due out early next year, as well as a starring role in the upcoming sequel to “The Shining,” “Doctor Sleep,” which also stars Ewan McGregor. Yes, of course I asked her to sing songs from “Moulin Rouge” to/with Ewan and she even joked she would sing him “Never Enough.” “Moulin Rouge 2”?!

Bottom line, Rebecca Ferguson is not only a standout star of one of the biggest film franchises, she is also incredibly relatable, easy to talk to and honestly my favorite person to interview since first starting this gig. Oh yeah, and “Mission: Impossible – Fallout” is really good too! I just have two requests before you see it First, re-watch “Mission: Impossible – Rogue Nation” beforehand since “Fallout” is a direct sequel and second, see Fallout in your closest IMAX theater because some of the best scenes were shot with an actual IMAX camera!

Lauren Bradshaw “Mamma Mia: Here We Go Again” is one word: delightful. It is fun, ridiculous, heartwarming, lighthearted and everything... read more