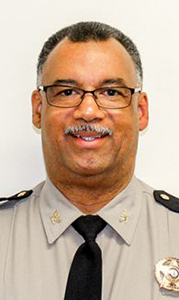 James Clarke is the winner of the Isle of Wight County’s special election for the position of sheriff. On Tuesday, Clarke defeated challenger James Pope with 4,806 votes to Pope’s 2,818. There were a total of six write-in votes.

Clarke has already been serving as county sheriff on an interim basis since March 1. His predecessor, Mark Marshall, announced his resignation in January. Clarke will now serve out the remainder of Marshall’s term in office, which expires on Dec. 31, 2019. Victoria Mainwaring, the county’s deputy registrar, said there will be another sheriff’s election on Nov. 5, 2019 for the term beginning on Jan. 1, 2020.

Votes recorded at the Isle of Wight Ruritan Clubhouse, located near the county courthouse, indicated a fairly even split between the candidates, with Clarke ultimately carrying the community with 137 votes to Pope’s 134.

All precincts saw low voter turnout. Turnout was highest in the county’s Hardy District, with 34 percent of registered Pons precinct voters and 33 percent of voters in the Rushmere precinct choosing to cast ballots.

“I’m overjoyed and excited,” said Sheriff James Clarke when asked for comments on the results of the election. “It was a rainy day, some roads were flooded, but still the citizens came out to exercise their right to vote, and for that I’m grateful.”

He also commended Pope, who also serves in the Isle of Wight County Sheriff’s Office, for running a cordial and respectful campaign.

“There were no bad words; Lt. Pope is a fine man and he did a great job,” Clarke said.

Pope released the following statement on his “Pope for Sheriff” Facebook page on Tuesday after learning of the election results:

“Let me first congratulate Sheriff James R. Clarke Jr. on his victory in tonight’s election. I would also like to thank everyone that has supported me over the past few months in this campaign. We ran a clean and professional campaign that I am extremely proud of. I wish I could personally thank you all individually for your support. I look forward to continuing to work with Sheriff Clarke to keep Isle of Wight a great community. God bless you all.”