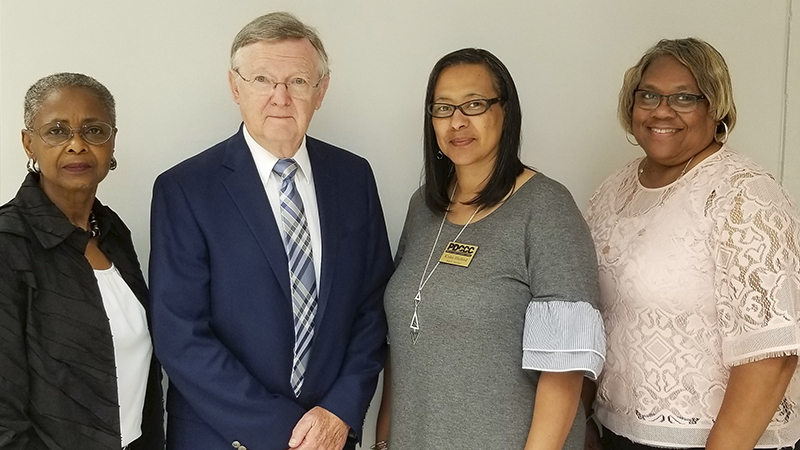 Pictured from left, Patricia Sowell, Kermit Hobbs, Kisha Watford and Syretha Wright were honored at a recent PDCCC Local College Board meeting for their longtime outstanding service. Richard Brooks was unable to attend the meeting.

At a recent meeting of the Paul D. Camp Community College Local College Board, five outgoing members were recognized for their outstanding service.

The following have served at least the maximum of two consecutive terms, or eight years:

“Paul D. Camp is so fortunate to have such dedicated board members who genuinely care about the college and its community, and believe in our mission,” said President Dr. Dan Lufkin. “We owe them so much for their generosity and guidance on programs and other college-related matters.”

For the outgoing board members, it is a consensus that their departure is bittersweet. Brooks, who spent 38 years in education and administration at the time he was appointed, served as chair of the board in 2015-16.

“I am grateful to have worked with such dedicated and outstanding people,” he said. “I am elated to have been a part and a witness to the growth of this institution.”

He noted that the growth of the dual enrollment program, the launch of the Cybersecurity program, expansion of the Nursing program and the creation of the Athletics program are among the highlights of his tenure.

Sowell, board chair from 2011-13, has also served as chair of the executive and financial services committees and board co-chair from 2009-11.

“It is important to me to represent Isle of Wight County, because I live in Carrsville, in the southern end of the county,” she said. “I try to ensure that our concerns for the future and education of our youth are addressed.”

Sowell noted she is fortunate to have had the opportunity to impact the education, and therefore, the lives of PDCCC students. “Change is good,” she added.

Watford feels like representing her locality allows her to act as a liaison between the board and her surrounding community. “I’m appreciative for the opportunity to have learned the ins and outs of college business, but I’m ready to pass the torch to afford the next member the same opportunity,” she said.

She said that she has been pleased with PDCCC’s community involvement and ways they have engaged the public with their events.

“My advice for incoming members would be to learn, be a voice for the college, as well as for people of the community to help grow our PDCCC, make a difference and enjoy.”

As a retired educator, Syretha Wright feels that it’s an important task to serve on the Local College Board. “Education is the key to living a productive life,” she said. She thinks it is time for new people with new ideas to serve and cited the fact that she is confident the college is in good hands at this time. “I will continue to recruit students to attend PDCCC,” she said. “I feel that it is a great place to start higher education courses and save some money while receiving a quality education.”

Hobbs, whose father is namesake of the Oliver K. Hobbs Suffolk Campus after he generously donated land for the current site of the college, helped promote the initial idea presented by Governor Mills Godwin to construct the Virginia Community College System. After visiting numerous organizations in the local area to raise awareness and support, the referendum passed.

“I felt that, to a tiny degree, I had a hand in its success,” he said. “The Oliver K. Hobbs Suffolk Campus was a source of pride for my father and my family. My opportunity to serve on the board was a perfect way for me to follow through on our family’s interest in our community college.”

Another perfect way for him to help from the board was to use his personnel management skills to serve on the committee for the selection of the current president.

“This was the most rewarding experience I enjoyed on the board,” he recalled. “Dr. Lufkin’s success at PDCCC proves that all of us, together, made the right selection of a new president.”

Hobbs served as chair elect from 2016-2018, and although he believes it’s time for “fresh ideas and perspectives,” he is a little sad to have completed his terms. “We have wonderful shared experiences that we will never forget,” he said. “We will preserve and cherish our friendships forever.”

In addition, June Fleming was honored for her two-year stent as chairman coming to a close at the end of June. The following appointments were conducted during the meeting, effective from July 1, 2018, to June 30, 2019:

Sarah Sugars has been appointed to fill Brooks’ Suffolk seat since the meeting, while the expired seat of Hobbs is still pending.

WENDY HARRISON is the public relations specialist for Paul D. Camp Community College. She can be reached at wharrison@pdc.edu.