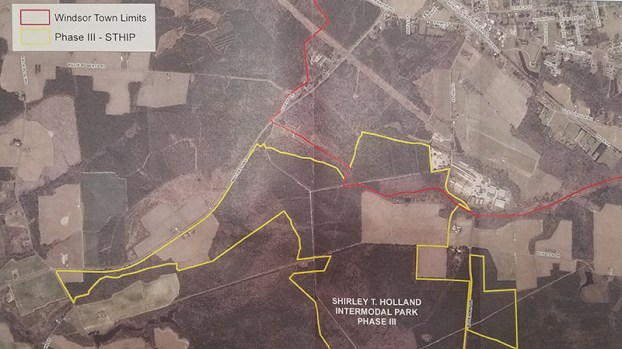 Isle of Wight County is considering the third phase of its Shirley T. Holland Intermodal Park be the location of the juvenile correctional center. This map, prepared by the county, shows the borders of the intermodal park in yellow and the southern border of the town of Windsor in red. A preliminary environmental study of the site by Kimley Horn has identified many of the forested areas within the park as potential wetlands.

Isle of Wight County is in negotiation with the state’s Department of Juvenile Justice to establish a juvenile correctional center in the county’s Shirley T. Holland Intermodal Park, located just outside of Windsor.

The proposed 60-bed facility would house Hampton Roads area juveniles and young adults ages 14-21 convicted of crimes ranging from misdemeanor drug offenses to sexual abuse and murder. According to Assistant County Administrator Don Robertson, the correctional center would be more similar to a school campus than to a typical prison, meaning that it would offer academic, athletic and career-training facilities and be focused on rehabilitation rather than punishment. He did clarify, however, that despite rumors to the contrary, the facility would still be fenced, just not with chain links and barbed wire.

“The state has a request for proposals on the street right now for designs for the facility; from what they’ve told us, there is no other facility in Virginia like this currently,” Robertson said.

Isle of Wight plans to provide the state with 20 acres of land and up to $500,000 toward utility costs. The state would be responsible for all other expenses associated with the project. The 20 acres, ideally, would be wooded to reduce the likelihood of any successful escapes.

“Kids from the city don’t do well in woods,” he said.

The correctional center is expected to bring around 240 jobs to the county, with average salaries of $60,000.

Robertson added that while negotiations over potential locations within the intermodal park are ongoing, the facility will definitely be constructed somewhere within the county. The General Assembly has included language in its 2018-2019 budget specifying this. The place would likely open sometime during the next two years.

The state selected Isle of Wight as its desired location for the site after Isle of Wight’s Board of Supervisors expressed interest and ultimately consented to having the facility in the county. Robertson explained that no public hearing was needed prior to the board giving its assent because the board does not own the available land in the intermodal park. The land is actually owned by the Isle of Wight Economic Development Authority, and to date, the EDA has not voted on whether to donate any parcels to the state. Another reason no hearing was held, Robertson said, is because until very recently, the county was uncertain whether the state was planning to move forward with the project.

The state had previously been in negotiations with the City of Chesapeake in 2017 to build a facility that would house both regional and local juvenile inmates. However, those plans fell through when Chesapeake’s City Council fell one vote short of the super majority needed to approve the transfer of property from the city to the state.

During an intergovernmental meeting between the county’s Board of Supervisors and Windsor’s Town Council, Windsor Police Chief R.D. “Dan” Riddle said he felt that his agency and the town’s local government had been excluded from conversations about the the correctional center to date. He also expressed concerns regarding the classification of the inmates and the impact the facility would have on his agency and its resources.

However, in a letter to Del. Emily Brewer (R-64) dated April 10 of this year, Windsor Mayor Carita Richardson wrote on behalf of the Town Council that “we believe the project will have a positive economic impact on the Town and County and the Hampton Roads region. In this regard, the Town of Windsor is supportive of a budget amendment to provide funding for a DJJ facility in Isle of Wight to better serve juveniles and their families in the Hampton Roads region.”

Town Manager Michael Stallings clarified that at the time the letter was sent, the town had been informed about the possibility of the facility in general, but that everything was still prospective.

As far as a specific location within the intermodal park, Isle of Wight’s interim director of economic development, Chris Morello, said that the county had been considering having the detention facility become the first occupant of the park’s third phase, which extends from Walters Highway to the Buckhorn Road area, part of which is in Windsor’s incorporated borders. However, a recent preliminary environmental survey of this land by Kimley Horn has identified numerous areas that are potentially wetlands.

“The next step is a much more in depth soil sampling. .. coming up with a much more definite map of where there are wetlands or uplands (non-wetlands) or marginal areas,” Morello said.