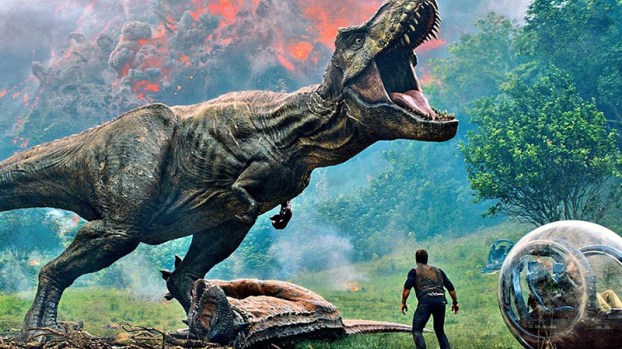 ‘Jurassic World: Fallen Kingdom’ is depressing (and other concerns)

As a “Jurassic Park” diehard, I am sad to report that I was disappointed with “Jurrasic World: Fallen Kingdom.” Let me be clear, if you don’t think you’ll enjoy watching 2-plus hours of dinosaurs dying in every horrible way you can imagine, “Fallen Kingdom” probably is not for you. I learned the hard way. I saw dinosaurs get engulfed by lava, plummet off a cliff, drown, kill each other, get shot, and in the most horrifying scene of the entire franchise, slowly burn to death. This is not the thrilling, entertaining, escapist “Jurassic Park” story we have come to know and love, but one that left a bad taste in my mouth — partly from the uneven and downright depressing storyline and partly because the film neglected making its charismatic main characters interesting for the second half of the film.

Let me back up, “Jurassic World: Fallen Kingdom” picks up a few years after its predecessor. The Jurassic World theme park has been abandoned, and InGen is hemorrhaging money due to lawsuits. But, of course, the island of dinosaurs won’t stay quiet for long. Isla Nublar suffers a volcanic eruption, threatening to make the dinosaurs extinct once and for all and creating a huge national debate. Should the United States intervene and save the dinos or just let them all die? As John Hammond said in “The Lost World,” and Ian Malcolm (Jeff Goldblum in a blink and you miss it cameo) repeats to Congress, “These creatures require our absence to survive, not our help.” Yes, Ian is advocating for extinction. Where is Dr. Sattler when you need her?!

But our pal Claire (Bryce Dallas Howard) wants to make sure life finds a way, preventing the dinosaurs from going extinct … again. Now an activist at the Dinosaur Protection Group, where she lobbies to save the dinosaurs, Claire is desperately looking for any glimmer of hope. In walks Eli (Rafe Spall), assistant to billionaire entrepreneur Benjamin Lockwood (James Cromwell) and former partner of John Hammond, who offers to evacuate the dinosaurs to a new island. All they need is Claire’s expertise and access to turn on the park’s dinosaur locating system … oh and it would help if she brings her former flame Owen (Chris Pratt) along to help wrangle the animals. Joining Owen and Claire on the journey are paleoveterinarian Zia (Daniella Pineda) and system administrator Franklin (Justice Smith). But will the crew be able to save the dinosaurs in time?

Let me start off by saying that I like some elements of the film. I enjoyed, ya know, the few moments when dinos weren’t being threatened, abused or killed. I liked Bryce Dallas Howard’s continued sincere and tough performance. I was amused by Jeff Goldblum’s pronunciation of “dinosaur,” which thankfully hasn’t changed after all these years. I was excited by some of the imagery homages to monster movies. But all of these moments were sprinkled throughout the film, leaving an uneven final product. It almost felt like I watched two separate movies — a depressing tear-jerker first half and a monster movie second half.

Another element I felt was really missing from the film, that its predecessor “Jurassic World” utilized perfectly, was its inability to capture the franchise’s spirit of adventure, terror and excitement. “Fallen Kingdom” starts off with a gloomy rain scene, and that mood permeates throughout. As a “Jurassic Park” nerd, I was also hoping for more sneaky references to its predecessors; they were on Isla Nublar after all! I did appreciate that director J.A. Bayona first showed Claire by doing a pan up from her heels (which I took to be a much-appreciated middle finger to those that criticized her footwear in the previous film.) But for the most part, it was various visions of suffering and death. Fun times.

I can’t wrap up this review without talking about one of the worst characters in movie history, Franklin. I don’t think I have ever rooted so hard for a character to be killed off in my life, and I was praying his death would be horrifying and come sooner than later (I’ll let you find out if my prayers paid off.) How in the world did the filmmakers think this character would be entertaining, funny or interesting? I seriously hated the character so much I started wondering if I should warn my hometown of Franklin, Virginia, to change its name before the world was collectively triggered.

As “Fallen Kingdom” came to a close, I was left wondering where the franchise goes from here. I know a third film is already in development, but I can’t imagine what it is going to look like. Let’s be real, I’ll always be excited and ready for a new addition to the “Jurassic Park” franchise. I just can’t stand another disappointment. On the bright side, maybe its successor will have way less Franklin and (God willing) way more LAURA DERN!